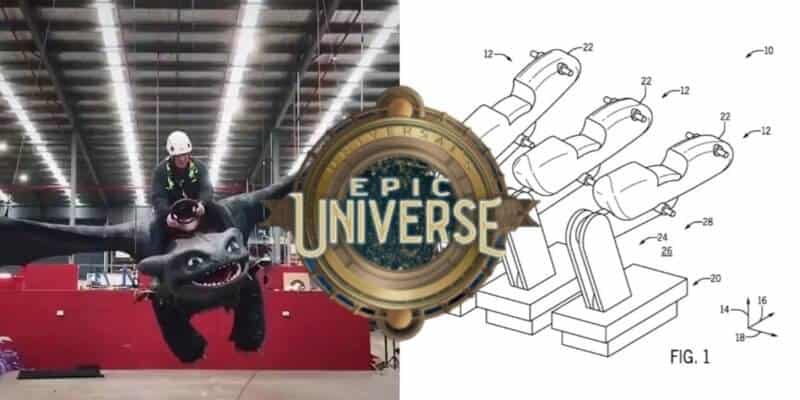 NBCUniversal’s theme park division continues to hold itself near the head of the pack when it comes to creating technologically advanced attractions. It seems that from Universal Orlando Resort to the upcoming Universal Beijing theme park, Universal’s creative team is always making groundbreaking lands and attractions, including the Wizarding World of Harry Potter at Universal Orlando and Universal Hollywood as well as the soon to be opened Super Nintendo World in Universal Japan.

Now, new patents appear to hint at how the mega-resort will continue its innovative creativity at its upcoming theme park, Epic Universe.

Once completed, Epic Universe will act as an official third gate to Universal Orlando Resort (or fourth if you include their waterpark Volcano Bay). At the moment, Epic Universe is at an indefinite standstill due to the financial constraints imposed by the pandemic on Universal Orlando, however, the theme park is still being slated to be built. And after the recent announcement from Mario creator Shigeru Miyamoto, confirming that Super Nintendo World, an Epic Universe land, would indeed be coming to Universal Orlando Resort — positive reinforcement has this reporter quite excited for the park, whenever it does arrive.

Although on-site construction has yet to go vertical, discovering new patents that can showcase new attraction technology and spark imagination for what is to come. The Orlando Business Journal recently reported on 2 new patents from Universal, and although we have no confirmation at this time, both could very well find a home in Epic Universe.

When we look at the photo associated with the patent, we can see it clearly resembles a certain Dreamworks animatronic Universal recently debuted for their Beijing theme park. In a promotional video for the new park, Universal showcased a Universal creative ontop of a flying Toothless animatronic from How to Train Your Dragon. What is to happen with the IP in the park is still uncertain, but the ride vehicle in the patent could very well resemble Toothless.

It is also heavily rumored that Epic Universe will have a How to Train Your Dragon section. If so, this ride technology could also be used in the Orlando park once it comes to fruition. Universal is known to duplicate attractions, similarly to Disney, within many of its parks around the globe. So, to see How to Train Your Dragon in various Universal parks would be quite status quo.

The second is a patent for a virtual queue, “A virtual queue that determines a reduction in capacity of a theme park attraction, identifies each guest in the virtual queue and gives them a new time slot.” This is something we have already seen Universal begin to implement with attractions such as Hagrid’s Motorbike Adventure at Universal’s Islands of Adventure and Fast & Furious: Supercharged at Universal Studios — as well as for queues within Volcano Bay.

Having virtual queues be carried out into Epic Universe would make perfect sense, and would allow guests to explore the parks more. Until the park opens, it will be interesting to see if other Universal parks continue to implement virtual queues in their current attractions.

We have also reported on a patent that Universal filed for a gondola system, which would work perfectly in Epic Universe. From what has been speculated, Epic Universe is to be comprised of various lands that all make up one larger park, or, an epic universe. The rumored lands are slated to be How to Train Your Dragon, Fantastic Beasts, Universal Monsters, and the now-confirmed Super Nintendo World. Having a system to transport guests between lands could be an efficient and fun way to swap worlds.

As more patents come to light from Universal, it will become more exciting to theorize by associating them with possible Epic Universe IP’s and place them in attractions. For now, of course, this is all speculation, but we do know that the patents will be put in place somehow by Universal.

Stay tuned to Inside the Magic to keep yourself up to date on all things Epic Universe.

What do you think about these patents? Are there any other attractions you could associate them with?