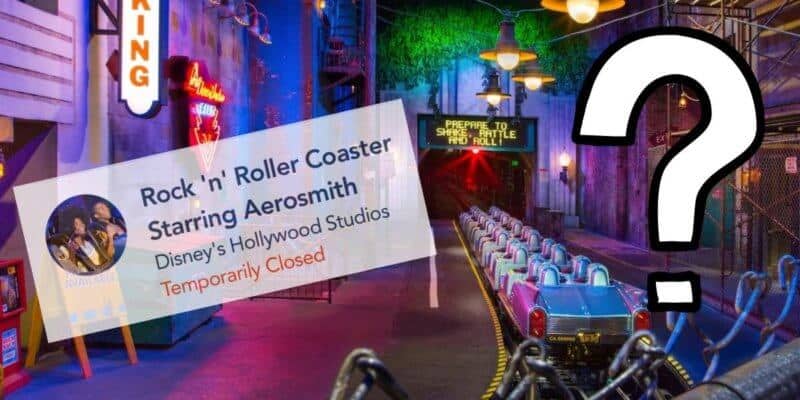 Rock ‘n’ Roller Coaster is officially back up and running as of January 6, 2021.

In case you aren’t familiar, Rock ‘n’ Roller Coaster is a high-speed coaster at Walt Disney World that brings Guests on a high-speed “tour” of Hollywood as they must get to Aerosmith’s concert on time.

So, what is happening with the popular Walt Disney World attraction? Here is everything we know.

As we previously mentioned, Rock ‘n’ Roller Coaster has not opened yet in 2021. Beginning on January 1 running through today, January 5, the attraction has been listed on My Disney Experience as “temporarily closed.”

This is more than likely due to technical difficulties since Disney has not listed the ride on the refurbishment calendar, though the closure hasn’t necessarily been expected.

Is Work Being Done?

“General Construction” could mean anything from a small part replacement to something more major; however, since Disney did not list Rock ‘n’ Roller Coaster on the refurbishment calendar, it is likely the permit was filed for something small and an extensive refurbishment was not planned. Typically, when Disney plans to close a ride for a number of days, weeks, or even months, they will update the calendar so that it says the will be closed for refurbishment. This wasn’t the case for Rock ‘n’ Roller Coaster.

If you have been following Disney Parks news, you know that the Tomorrowland Transit Authority PeopleMover has been closed for nearly one year now. Many of you may be thinking “do we have another PeopleMover situation on our hands?” Personally, I don’t think so.

With the PeopleMover, we know there were several issues reported and that were well-known, causing it to be temporarily closed. These issues occurred prior to the temporary park closures in early 2020, but once the parks opened in mid-July, Disney then listed the attraction on the refurbishment calendar.

With Rock ‘n’ Roller Coaster, there haven’t been as widely reported issues and therefore, we don’t see this being a similar situation to the Tomorrowland Transit Authority PeopleMover.

In fact, we see this Rock ‘n’ Roller Coaster closure being similar to the Haunted Mansion situation in 2020. Back in March 2020, the Haunted Mansion at Magic Kingdom was closed for over four days for unknown technical issues; however, the ride did reopen within the week.

When it comes to Rock ‘n’ Roller Coaster, we are going on day four of not being able to see Aerosmith in concert, at the time of this article’s publication. But if this is, in fact, similar to what happened with the Haunted Mansion, we could once again take the super-stretch limo very soon.

Inside the Magic will continue to update you as we get information regarding this fan-favorite attraction.