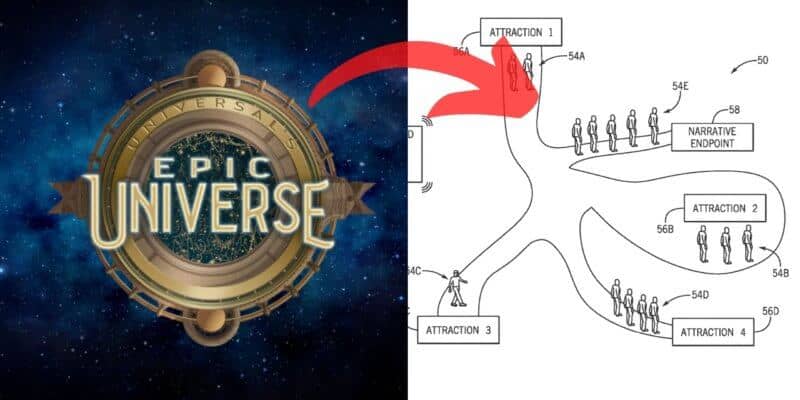 Universal is always innovating its theme parks, whether it be creating immersive new lands such as The Wizarding World of Harry Potter or updating older attractions to mesh with today’s jaw-dropping technology. Considering Universal Orlando has a third gate on the way, Epic Universe, taking a look at what attractions will find a home at the theme park is a great way to patiently wait for the park to come to fruition.

Unfortunately, Epic Universe is currently on an indefinite pause due to the financial constraints put on the Universal company from the pandemic. Although the theme park is slated to open “at some point”, according to Universal, there is no projected timeline for the project. That being said, Epic Universe will have many new attractions and shows, all of which take time to plan and patent. So even though construction may be at a standstill, it does not mean the Universal creative team is not busy creating the attractions that will take place in this park.

Most recently, Universal filed a new patent that would seemingly work quite well in a certain section of Epic Universe. We have a full guide on what is currently available in terms of information on Epic Universe, but for this article, there is one sure thing that must be known, and that is the rumored lands that will comprise within the theme park. The rumored lands are: How to Train Your Dragon, Fantastic Beasts, Universal Monsters, and the now-confirmed Super Nintendo World.

A Universal Monsters land would be a very smart choice for Universal, considering the popularity of the IP — especially during the Halloween season. Due to the cult-following that Halloween Horror Night boasts, having a year-round scare section could do very well. This section could include classic monsters such as Dracula, Frankenstein, Phantom of the Opera, The Mummy, Creature From the Black Lagoon, and more! We have heard rumors of a dark ride to occur within this land, which could be the perfect solution to a year-round haunted house. However, what if Universal created a choose your own adventure style haunted house instead?

The new patent filed by Universal as of January 21, 2021, is for a “Dynamic Quest-Based Narrative for an Amusement Park”. The description of the patent goes on to explain:

From that description, it is easy to understand that Universal is thinking about creating something interactive, with multiple storylines. The patent mentions that the “quest-based narrative includes a plurality of sets of information,” which hints towards the choose your own adventure theory.

However, the photos within the patent are what really push this theory forward. As you can see below, the patent suggests that there are various “attractions” where guests may go throughout the narrative of the overall attraction, and while the location you begin in may vary, it seems the narratives endpoint is always the same.

By having the photo show guests walking to the different paths, the idea of this being a haunted house similar to those of Halloween Horror Nights seems plausible, considering haunted houses are the only walk-through attraction that Universal has.

It also seems that the interactive elements will use new technology. In the above photo, we can see that there is a Dynamic Quest-Bases Experience System which is likely the control center. If guests were to do a choose your own adventure on foot, there would need to be something that helps to guide them through the attraction, letting guests know where to go next based on their decision.

The above photo signifies that this patent is creating an interactive device that could send and receive signals. It would be interesting if this device is what could be given to guests to guide them through a Universal Monsters haunted house — if this theory proves to be true. It would also be the perfect way to control guests without the use of a ride vehicle.

Although Universal has yet to announce any attractions within Epic Universe, the idea of a choose your own adventure ride has floated around for a few attractions based on permit speculations. Therefore, it wouldn’t be surprising to see the idea utilized somewhere in the park. Plus the choose your own adventure option allows guests to want to re-experience the attraction because there is still more to explore.

Stay tuned to Inside the Magic as we continue to report on all things Epic Universe!

Do you think Epic Universe will have a Universal Monsters section? Would you like a choose your own adventure haunted house walkthrough attraction?