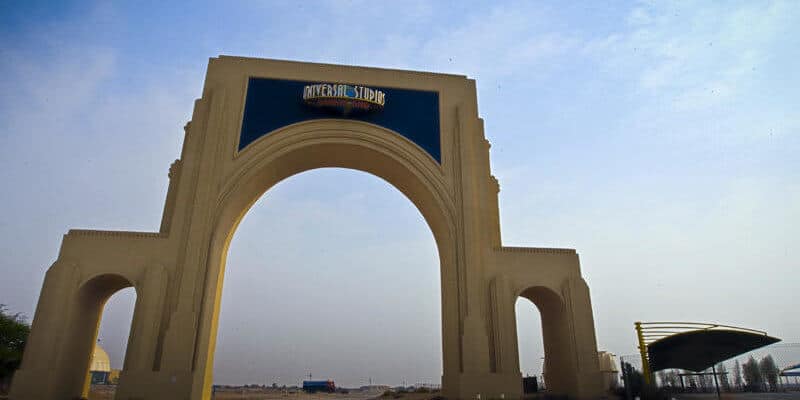 Universal is a leader in global theme park entertainment. They have expanded to four theme parks globally with the exciting new addition of Universal Studios Beijing coming later this year. However, there is one theme park, Universal Studios Dubailand, that was in the midst of construction but Universal abandoned the project before it was completed. Could Universal’s newest theme park plan for Orlando suffer the same fate?

Universal broke ground on Universal Studios Dubailand in 2008. According to a report from Arabianbusiness.com:

The theme park was to cover more than two million square metres and was expected to cost around $2 billion to build…when the famous Universal Studios gate was installed at the entrance to the park’s site and the project was set to open in December 2010.

Unfortunately, as you well know, the global economy collapsed in 2008 ultimately leaving this project to stall until it was canceled.

The famous Universal Studios arches were constructed but then left alone in the middle of the Dubai desert for several years before being taken down. Below you can see how what the park might have offered if it had opened.

We recently discussed how the construction site for Universal’s Epic Universe park in Orlando appears to be abandoned. That is because Universal has put the project on hold due to financial hardships suffered by the company as a result of the ongoing pandemic.

You can see in these photos from @bioreconstruct how Epic Universe currently looks;

While Universal has said that Epic Universe will be built, “at some point” we have to understand that the financial strain caused by the pandemic could severely alter the original plans for Epic Universe, or worst-case scenario, cancel it. Considering this is what happened in the case of Universal Studio Dubailand, the possibility is something to consider.

Related: Universal Takes Huge Loss in Q3- What Will They Do to Survive?

In my opinion, something that will help Epic Universe is the overwhelming popularity of the Universal Orlando Resort. Universal has had many at-capacity days during the current pandemic (although capacity is currently limited), and they continue to hold events that draw Guests to the theme parks.

Additionally, a successful roll-out of a vaccine to help fight the spread of the virus could help the tourism industry recover. Hopefully, a quick recovery will happen in Central Florida and Universal will continue to see value in growing their resort in Orlando.

So what do you think? Could Epic Universe be canceled, or will the company recover so this park can be built? Let us know your thoughts in the comments!