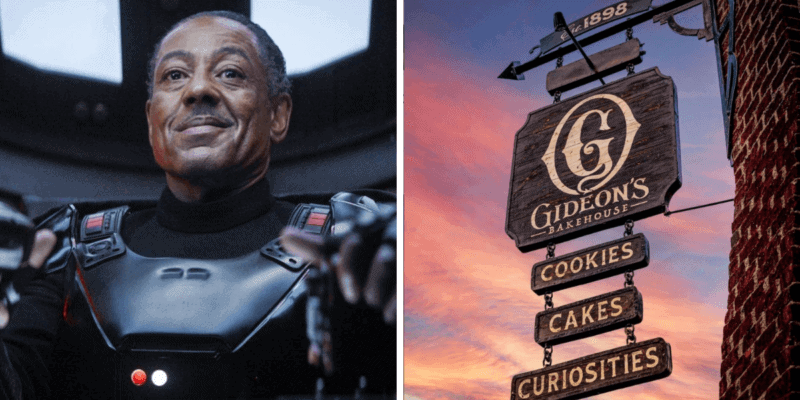 It appears a new bakery has finally opened at Walt Disney World’s shopping and dining center, Disney Springs, and Disney Guests already can’t get enough of it.

But, there is something rather concerning about this soft opening… Especially with the timing between this and the season finale of Star Wars: The Mandalorian… and we had to ask the blunt question:

Is Moff Gideon the “Gideon” behind Gideon’s Bakehouse?

Don’t get distracted by the massive, delicious, chocolatey cookie goodness — this new shop has “dark side” vibes radiating from every corner. The turn-of-the-century steampunk theming capped with gargoyles and Krampus harkens back to the foreboding architecture found across the Star Wars universe, like Darth Vader’s castle on Mustafar (Fortress Vader). The place is riddled with “curiosities,” which is just a fancy way of saying there are dark secrets to be explored (i.e. The Code of the Sith!). Also, purchases are limited: customers can only order 6 cookies at a time. Sure, each cookie weighs half a pound, but still, who does that?

With dining locations like Jock Lindsey’s Hangar Bar — based on Indiana Jones —  Disney has proven that it can incorporate characters in a very modern, subtle way that can hide the true identity in plain sight so unsuspecting Guests who have never seen the films of TV shows can enjoy a place in their own way.

But fortunately — or unfortunately — this is not the case with Gideon’s Bakehouse. Moff Gideon had no part in bringing this decadent bakery to life. This Gideon is a different person from a different age entirely, and the establishment isn’t owned by Disney or Lucasfilm.

In his never-ending search for baking inspiration, Steve Lewis, the bakery creator, purchased what he thought was an antique cookbook published in 1898. To his surprise, the margins were filled with faded notes and doodles from what appeared to be a young boy who had dreams of becoming a baker. The name written at the back of the book was “Gideon,” and Steve decided to fulfill that child’s wishes with the name Gideon’s Bakehouse™. Paying tribute to the origins of the name, Gideon’s shelves are lined with strange works of art, aging books, and curious antiquities from the Victorian era.

Moff Gideon, on the other hand, was brought to life by actor Giancarlo Esposito in Jon Favreau and Dave Filoni’s hit Star Wars show The Mandalorian. The show’s chief antagonist is hellbent on capturing Grogu (AKA The Child AKA Baby Yoda), presumably to harvest his midi-chlorian rich blood.

Moff Gideon stands as one of the last surviving imperial leaders of the First Galactic Empire in the years following Episode VI: Return of the Jedi (1983). Found to be in possession of the Darksaber — though we do not yet know how he came to obtain it — this Gideon appears to have a direct, personal beef with Mandalorians, especially the Darksaber’s previous owner Bo-Katan Kryze (Katee Sackhoff). In fact, he instigates a fight with chief protagonist Din Djarin (Pedro Pascal) and his beskar spear just to keep the Darksaber out of Bo-Katan’s hands for a little bit longer.

We last see Moff Gideon in the custody of Djarin, Kryze, bounty hunter Fennec Shand (Ming-Na Wen), and New Republic Marshal Cara Dune (Gina Carano) with his entire next-generation dark trooper platoon destroyed by Luke Skywalker. So, when you think about it, it doesn’t really fit this Gideon’s character to do something as awesome as open a bakehouse, anyway.

As it turns out, Moff Gideon has no connection to Gideon’s Bakehouse, though some Disney fans have continued to point out the coincidence.

Gideon’s Bakehouse has just celebrated its soft opening today, December 23, and Star Wars: The Mandalorian season 3 is scheduled to debut on Disney+ Christmastime 2021 with Moff Gideon expected to return.