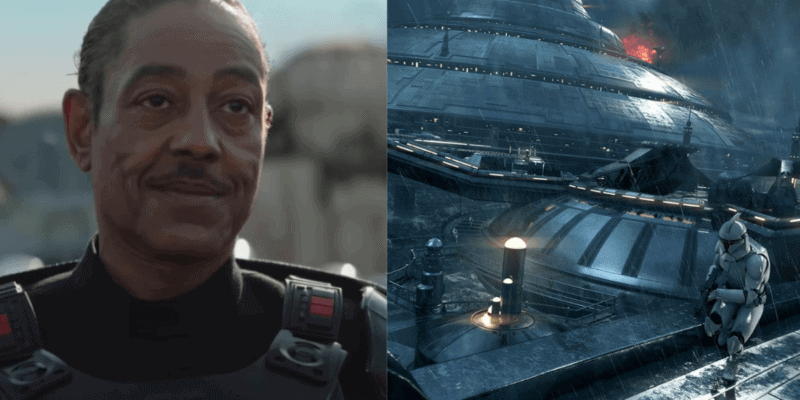 This week marks the end of The Mandalorian season two, and we’re only hours from the Star Wars finale premiering on Disney+. With all sorts of rumors and speculation circling the finale episode, Chapter 16, let’s first take a look back at last week.

In the penultimate episode, our unlikely hero, Din Djarin (Pedro Pascal), received the coordinates of Moff Gideon’s ship from an Imperial base on Morak — the entire situation was quite dramatic and resulted in Djarin having a bit of a crisis of faith. Now, he, Cara Dune (Gina Carano), Boba Fett (Temuera Morrison), and Fennec Shand (Ming-Na Wen) are off to rescue The Child.

Gideon has been after Grogu since season one of The Mandalorian, especially after Mando’s destruction of the Imperial outpost on Nevarro. While Djarin has been able to protect The Child from Gideon’s Imperial remnant and other bounty hunters, his luck ran out in Season 2, Episode 6 (Chapter 14: The Tragedy). Grogu was captured by Moff Gideon’s Dark Troopers while The Child sat defenseless on the Seeing Stone on Tython.

Related: Why Din Djarin May Not Get Grogu Back Until Season 3

Now, some fans have begun to speculate that Gideon could be attempting to transport Baby Yoda to the planet Kamino. Kamino is a planet unknown to most and was, in fact, erased from the Jedi Temple records on Coruscant. Located just beyond the known Star Wars galaxy, Kamino is the home of the Kaminoan cloning facilities.

First seen in Star Wars: Episode II – Attack of the Clones, esteemed Jedi Knight Obi-Wan Kenobi traveled to the ocean planet to discover that a deceased Jedi had commissioned a mass army’s cloning for the Galactic Republic. Unbeknownst to literally everybody — except the shady Chancellor Sheev Palpatine (and we all know how that ended) — Kamino was the spark that lit the Order 66 downfall of the Jedi and the galaxy. The Clone Wars animated television show, co-created by The Mandalorian showrunner Dave Filoni showcased Kamino in numerous episodes, further explained how the clones and Boba Fett were created on the planet.

While there’s a slew of planets that Moff Gideon could be hiding on according to the map locator Mando found — including the moon-world Nar Shaddaa or Vandor — Gideon was last seen in Chapter 15: The Believer traveling through hyperspace, implying that the Imperial leader is far from those planets and could, in theory, be headed to Kamino.

Related: ‘Mandalorian’ Director Hints Grogu Could Go to the Dark Side

The ‘cloning of The Child’ theory first begun during season one of The Mandalorian after Dr. Pershing was seen wearing a Kaminoan-inspired patch, implying the doctor specialized in cloning organisms. This theory was strengthened in Chapter 12: The Siege after a holographic message featuring Dr. Pershing implied that Gideon’s forces infused Grogu’s high-midichlorian count blood into host bodies — none were successful. Pershing stated that they had exhausted the blood and further explained Gideon’s fascination with capturing Grogu.

While Gideon and the Imperial leftovers’ intentions with Grogu are not entirely clear — they could actually explain Supreme Leader Snoke’s origins — The Child may be the test subject for cloning. Due to his high midichlorian count, the Empire might be attempting to create force-sensitive super-troopers that are completely obedient to Imperial commands or, as stated above, Snoke-like humanoids.

If that’s the case, then we may see The Mandalorian‘s second season end on Kamino. Although this could be a long shot considering the current Star Wars canon, that can be rewritten — and has been in the past.

There are too many red flags to suggest that the Empire is NOT, in fact, attempting to clone The Child and the abandoned cloning facilities on Kamino are the perfect operation area.

Furthermore, Boba Fett, whose father, Jango Fett, was the clone sample, was, in fact, “born” on Kamino. Showing Din Djarin and his team of renegades the planet would effectively wrap-up Boba Fett’s story arc in this season of The Mandalorian, as this is the third official episode featuring the fan-favorite bounty hunter.

A leaked playlist for tonight’s episode indicates that someone dies — it could very well be Boba Fett upon his return to Kamino.

This speculation is a long-shot, but Jon Favreau and Dave Filoni have surprised Star Wars fans repeatedly. Could this Kamino tie-in be the cherry on top of Season 2 of The Mandalorian?

Will Baby Yoda end up on Kamino? Let us know in the comments below!