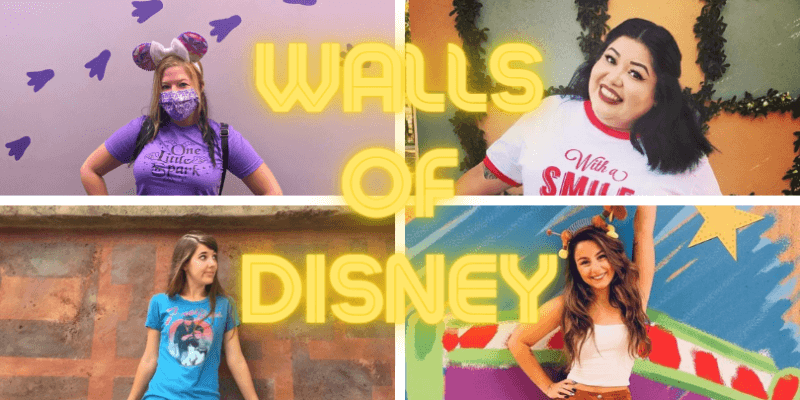 Do you want Disney photos that look different from your classic annual Cinderella Castle Instagram picture? Not only do Disney Parks have some of the world’s most photographed locations, they also have some great places to take photos that are not Spaceship Earth or the Tree of Life. Disney Parks shine with beauty, even including the walls. No, really. The walls! In fact, the walls of Disney are hot photo spots.

What are the Instagrammable walls of Disney?

If you are unfamiliar with the walls of Disney, the trend started as an Instagram craze. The purple wall (which we will have a picture of for you) started the wallflower fashion within Disney theme parks. The idea behind the Walls of Disney is that you can make any location into your newest profile picture because Disney is just that beautiful.

Don’t believe me? We’ll show you why. Let’s look first at some of the classic walls of Disney, then we will show you some of our favorite hidden gems. There are walls here from Walt Disney World, Disneyland, and even one from the Cruise Line. These walls are so colorful and fun; we can’t wait to share them with you!

This Disney wall is in Magic Kingdom’s Tomorrowland. As I said, this original purple wall started the Insta-worthy trend and has become a Disney park classic.. It is a great basic background to your photos that makes colors (especially pastels) pop!

As Disney noticed the popularity of the purple wall, they transformed a portion of it for variety: the Galaxy Wall. This geometric wall is a beautiful upgrade to a classic.

This wall can be found as you exit Spaceship Earth. The blue and pink give serious Sleeping Beauty vibes. It’s as peppy as can be!

This Disney wall can be found outside The Seas with Nemo and Friends at EPCOT. I like the cool colors that flow like the water inside this pavilion.

Many walls are in the Africa section of Disney’s Animal Kingdom, specifically in the Harambe Marketplace area. The “You are Most Beautiful” wall is tucked near a cast member entrance so you’ll need to hunt for it within the outdoor dining area in the Harambe Market. The Moss Wall is in Pandora!

These are a new classic, but they are classic all the same! You can find these walls in Disney’s Hollywood Studios in Toy Story Land. You’ve got a friend in these walls, that’s for sure! My personal favorite is the Popsicle Stick Wall, on the exit path from Toy Story Mania!

Also in Disney’s Hollywood Studios, there are a few walls in the Incredibles area on your way over to Toy Story Land. Feel incredible in your wall photo taken in this super area.

Do not despair Disneyland Resort guests! We have walls for you too! These are just a couple of the walls outside the it’s a small world attraction. Each Small World wall looks beautiful and dapper with bold colors or sweet Disney tees!

This photo was taken from Walt Disney World’s incarnation of Batuu at Star Wars: Galaxy’s Edge, but these walls are at Disneyland as well. The wall pictured isn’t the only stately wall within the area either. Many great walls await you, filled with The Force… and Instagram likes.

This wall is quite prominent, but due to the lighting, it might be passed up. However, if you have some quality filters and a good flash, this wall can be photography gold! You can find this wall inside Disney’s California Adventure at Disneyland Resort.

This wall is big enough that it shouldn’t be a hidden gem, but so many people just walk right past it. Don’t walk past this rustic billboard; feature it in your vacation album for years to come!

Don’t have a theme park ticket? That’s ok! Disney Springs has some walls as well, including this Jock Lindsey wall outside Jock Lindsey’s Hangar Bar.  This wall teems with adventure.

This wall is a gem that’s only available until the completion of the Guardians of the Galaxy coaster at EPCOT. The best part: Different sections of this wall have different color schemes, ready to match any outfit. This construction wall is lovely, and makes for some photos that are out of this world!

While you’re at EPCOT, wander over to Journey into Imagination and take a picture with this Figment wall. It looks like Figment mischievously sneaked along it’s surface, making it an adorable photo-op.

This wall is such a hidden gem that few guests actually get to see it! You can only take a photo with this wall if you go on a tour at EPCOT: Future World. Capture your inner cast member with a photo at this secret wall.

If you will be going on a Disney Cruise, check out this awesome wall aboard the Disney Dream! If you love Pirates of the Caribbean, show off your fandom on the seven seas! Arrrgh you ready to get a photo at this wall?

Even the Disney hotels have fantastic wall backdrops. If you visit Pop Century at Walt Disney World Resort, take a moment to take a groovy snapshot with this beauty!

Which Wall of Disney is your favorite? Let us know in the comments!

Comments Off on Your Complete Guide to the Walls of Disney