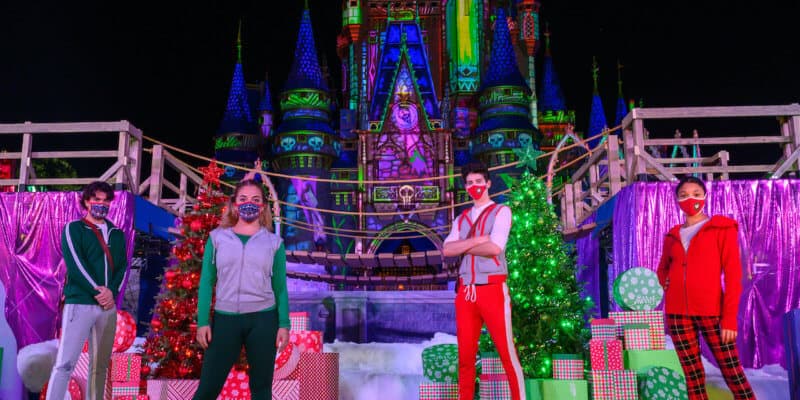 Recently, we reported on a large stage structure that was quickly constructed in front of Cinderella Castle at Disney World’s Magic Kingdom theme park — and then, just as quickly, taken down.

Originally, Disney fans presumed this stage display was for the upcoming Disney Parks Christmas Day special that traditionally airs on ABC. This year, the special holiday event has been promised to be “reimagined” amid the ongoing pandemic that has changed the Guest experience at Disney World and kept Disneyland shut for eight months.

Now, Disney Parks Blog has cleared up the stage structure — and announced that Disney is planning not one, but three, holiday special television events in 2020! The first will be the “Disney Holiday Magic Quest,” which sends a group of four teens on an adventure through Magic Kingdom.

Raven-Symoné virtually hosts the challenge, which features “ZOMBIES 2” stars Milo Manheim, Kylee Russell, Ariel Martin, and Pearce Joza competing in a holiday adventure through Magic Kingdom Park. After iconic Disney villains Maleficent and Evil Queen steal holiday magic, the stars must overcome obstacles and complete challenges to restore the joy of the season. The challenges take place throughout Magic Kingdom Park and include iconic attractions and locations like Haunted Mansion and Cinderella Castle.

The group will be competing for a grand prize that benefits Toys for Tots, a United States Marine Corps program that benefits children in need every holiday season. The Walt Disney Company is a long-time partner of Toys for Tots.

Several photos from the Disney Christmas TV special were featured in the Disney Parks Blog post:

It appears that the quest will involve numerous challenges, including this sleigh ride — featuring a faux reindeer — by Cinderella Castle.

This challenge, which is set-up outside of the iconic Haunted Mansion attraction, could possibly have something to do with setting a table for a Be Our Guest inspired challenge, but we’ll have to wait to find out for sure!