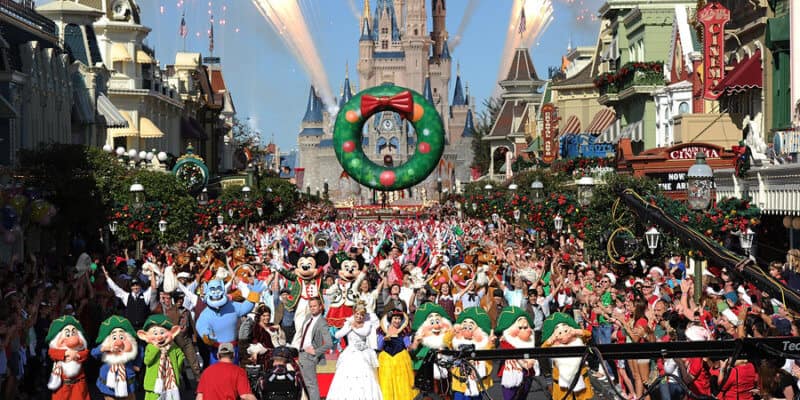 Yesterday, we shared that Deadline reported that the Christmas Day Disney Parks special — which typically features large crowds of Guests, special performances by celebrities like Derek and Julianne Hough [above with Mickey and Minnie] — will be “reimagined” for 2020.

No details about celebrity Guests or character appearances were included in Deadline’s report. Disney has also not made an official announcement about the Christmas spectacular.

Today, however, Walt Disney World Guests noticed that stages appear to be being constructed in front of Cinderella Castle. This is where the Disney World portion of the holiday special is usually filmed, so it begs the question, what exactly does “reimagined” mean?

We think the biggest change is likely going to be no Guests present during filming. Here’s why.

Throughout the COVID-19 pandemic, The Walt Disney Company has stressed the importance of health and safety for both Guests and Cast Members. New protocols at Disney World include the temporary suspension of fireworks and parades, which tend to cause large crowds of people to congregate in non-socially distanced groups.

Furthermore, Disney has suspended stage shows, with the exception of Frozen A Singalong Celebration — and has, in fact, laid-off many entertainment Cast Members at this time — so they have clearly not been willing to risk the possibility that Guests will fail to adhere to social distancing requirements.

It seems highly unlikely that Disney Parks officials will relent on this rule to film the holiday special, especially as Guests will be even more keen than usual to gather in front of a stage, since they simply haven’t seen live entertainment in the parks for so long!

Disneyland can’t host Guests at all this year.

Since Disneyland Park and Disney California Adventure Park remain closed at this time, there is no practical way for Disney to host Guests for any sort of filming.

Purely from an aesthetics standpoint, it doesn’t seem likely that the production team would cut from footage of a large crowd at Orlando theme parks to no Guests at all in Anaheim.

Disney isn’t likely to host the parade this year.

One of the highlights of the Christmas Day Disney ABC special is the parade, which features Santa Claus and numerous Disney characters decked out in holiday attire!

Again, due to social distancing protocols, the parade is not likely to be hosted — at least not like it normally is — in 2020.

This automatically means the holiday special will need to be reimagined in some fashion to account for the fact that the portion normally taken-up by the parade won’t air on ABC this year.

It seems likely that Disney will use the stages in front of Cinderella Castle to film either after hours at Magic Kingdom or before rope drop. The parade may occur without Guests present, footage from previous years may be shown, or Disney may have something else entirely up their — undoubtedly festive — sleeves!

Stay tuned to Inside the Magic for additional details about the Disney Parks Magical Holiday Celebration as they become available and sign-up for our newsletter so you don’t miss a second of Disney theme park news.

Comments Off on Will Guests Be Able to Attend Disney Holiday Special Filming?