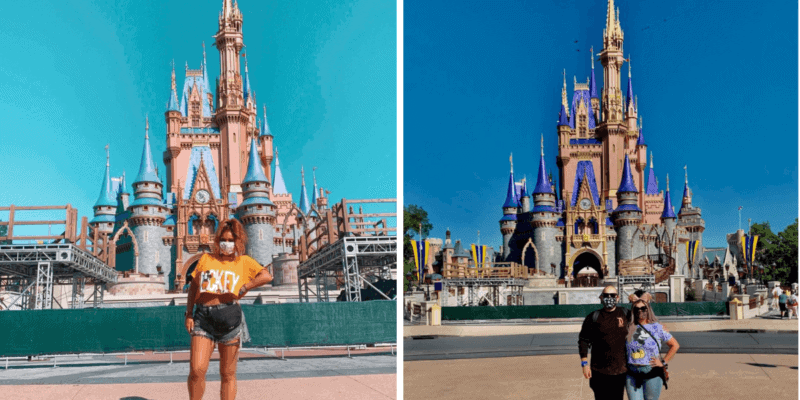 Pictures are appearing across the internet showing some strange stage-like structures being put in place right in front of Cinderella Castle in Magic Kingdom Park at the Walt Disney World Resort.

The two structures are spaced equally apart and are behind a new barricade blocking off the Castle stage. This was not installed yesterday when one of our reporters was in the theme park.

✨ Super Happy at the happiest place on earth ✨??✨?? thanks fiancé for an amazing birthday ! #birthdayweek

While there is no official word yet, it appears that these platforms will be used for camera placement for the taping of Disney’s upcoming holiday special.

We recently reported that the holiday special, which is taped and shown by ABC, will be modified this year due to the current situation.

Now, further details of this reimagined holiday special remain unknown. But one can imagine that Disney World’s holiday Cavalcades will be on display just like its beloved parade in years past, and special guest performances. We at Inside the Magic will continue to update our readers as more information on the “reimagined” Disney Parks Magical Christmas Day Celebration comes to light.

Planning a trip to Walt Disney World this Holiday Season? Our friends at Academy Travel are standing by ready to help you make this next Disney vacation as magical as possible! Click here to learn more and receive your free, no-obligation quote today!

Are you excited for Disney’s Christmas special this year? What do you think will be different? Let us know in the comments!

Comments Off on PHOTOS: Stages Set Up In Front of Cinderella Castle