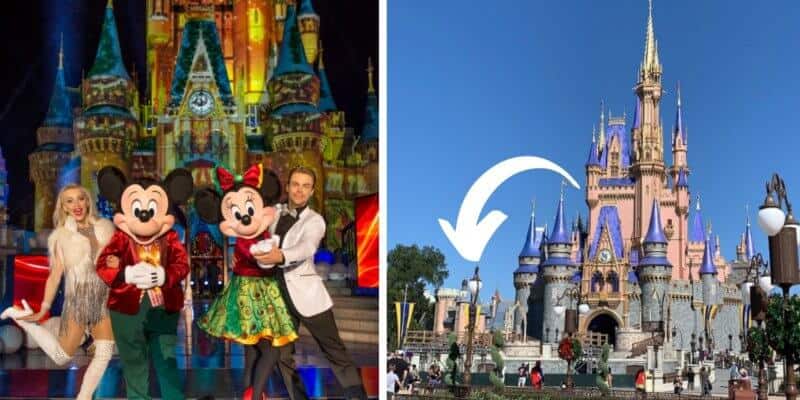 Amid Disney World debuting the spectacular holiday projection show on Cinderella Castle at Magic Kingdom, we noticed the brand new stage that was installed has been removed. Could Disney have already filmed part of the Disney Parks Magical Christmas Day Celebration?

We already know that Disney World still plans to air a Christmas Day special, as it has every year, and when we saw a new stage go up, many of us were hopeful that this would be for the Christmas Day Parade special that is filmed throughout November and December to capture celebrity performances,

We earlier reported that although Disney World would be airing a Christmas Day Celebration, it would be reimagined:

Although celebrity performances were not yet confirmed by Disney, with the stages set up perfectly for cameras to capture something in front of Cinderella Castle, Guests and Disney fans are hoping that this means we get a few fun Disney performances on Christmas Day.

The reimagining, we imagine, will likely come from the fact that the large crowds we typically see at each performance or parade will not be there due to the need to social distance. A way around this would be to film early in the morning before park open, or later at night once the Magic Kingdom closes, in order to not create cause for a crowd, but still give everyone the Disney special they are used to on Christmas morning. Of course, we do not know what will be included at this point.

The good thing about this news, is that Cinderella Castle photos can return to normal! As much as we hope a Christmas special was filmed these past few days — it came in sacrifice to Magic Kingdom Guests who were visiting the parks and had to take castle photos with a huge obstruction in the way.

Although the photos still look super cute, everyone loves a perfect Cinderella Castle photo at Magic Kingdom, and now it’s back!

If you want to capture that classic Disney World photo — why not book a Disney vacation? Click here to get started today!

Do you watch the Disney Christmas Day special? Let us know in the comments!