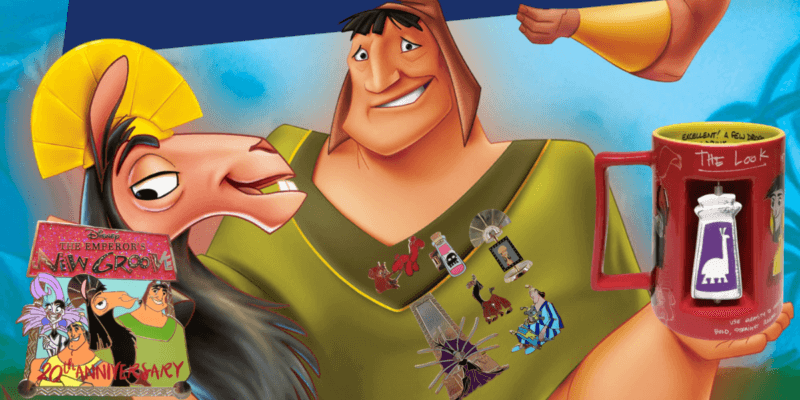 Have you ever thought about building a giant palace for yourself? Do you dream of having a secret roller coaster in the basement? If you could, would you turn your enemies into llamas? Well then, you are probably a fan of Disney’s The Emperor’s New Groove. Disney fans have been yelling “No Touchy!” and “Pull the lever, Kronk!” for 20 years now! This fun, sarcastic, and goofy comedy charms the hearts of those who have seen this Disney movie once or 100 times over. To celebrate the film’s 20th anniversary, Disney released some Kuzco-tastic Emperor’s New Groove anniversary merchandise on shopDisney. You can shop for this groovy merchandise to keep from throwing off the Emperor’s groove. Check it out before it gets turned into a harmless little flea… or sells out… yeah, selling out is the most likely scenario.

Propose a toast to yourself with this amazing animation mug. Pre-production art covers this mug along with production notes from the animators! This is such a unique mug, with its sneak peek into the animation process and… one more surprise (no, it’s not Kronk’s spinach puffs).

“Boom, baby!” – a vial of the poison for Kuzco (Kuzco’s poison) on one side. The vial spins, showing either the llama side or the side that tricks Yzma into thinking it was deadly poison. This mug can be purchased for $19.99 from shopDisney. Be aware that this mug should be spoiled like Kuzco – it is not dishwasher or microwave safe, so you’ll have to handwash it. Or, you can put it on display and tell your guests “No Touchy!” as they admire it on your desk.

Do you love Disney pins? “Bring it on.” From sleepy-time Kronk to regal Yzma, this pin set has it all. I especially love the pin of Bucky the Squirrel, as he threatens Emperor Kuzco in his llama form with his loud balloon animal. Remember, this is a limited edition, six pin set (only 1,900 sets will be released). So, if you “likey” this set, shopDisney offers this pin collection for $79.99. Don’t throw off your groove, and pick up this set if it belongs in your personal Kuzcotopia.

If you would like just one pin, treat yourself like Kuzco and buy this limited release anniversary pin! You’ll love it so much that you’ll make your own theme music. Those pink sparkles behind the movie title really give this pin a royal aesthetic. This pin has been available for a while, unlike the other two brand-new products, but it’s just as special. “Uh-huh, uh-huh, uh-huh!” This pin is available on shopDisney for $15.99.

Will you be grooving over to shopDisney to purchase some Emperor’s New Groove anniversary merchandise? Let us know in the comments.