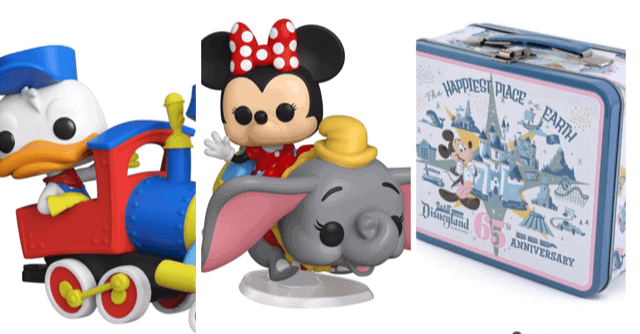 Although the Disneyland has been closed for months, Disney fans can still celebrate the resort’s 65th anniversary!

With the Downtown Disney District being open, Guests have been able to embrace a little of the Disney magic. The World of Disney store did release a collection of 65th anniversary merchandise. However, with a crowds being large and the district not being as easily accessible for everyone, Target stores have a better solution.

Target stores have released a limited collection of Disneyland’s 65th anniversary items! The collection includes everything from pins to Funko Pops!

Thanks to @disneylifestylers on Instagram, we got a look of this 65th anniversary mug that’s perfect for the coffee drinker in your family.

Another popular item has been this Disneyland 65th anniversary tin lunch box! This is a great collector’s item and is still available on Target’s website.

Related: Happy 65 Years, Disneyland! How to Celebrate at Home

Target also featured plenty of limited edition Funko Pops in celebration of Disneyland’s anniversary. This Matterhorn attraction Pop with Donald, is just one of the collection. This one is still available on the Target website as well.

There are more limited edition items that are a part of this collection that have become quite popular and now seem to be sold out. There are limited edition pins, a 65th anniversary tee, and a very coveted mini backpack. Thanks to @paulsthemeparkadventure on Instagram, we got a look at the pins, tee, and the other Funko Pops that are now sold out.

Alot of the new Disneyland 65th anniversary merch was released today they was exclusive to target. Sadly alot of it sold very quickly so i wasnt able to see everything. On my stories i have the full list of everything i saw/bought today

Were you able to grab any items from Target and Disneyland’s exclusive collection? Let us know in the comments!