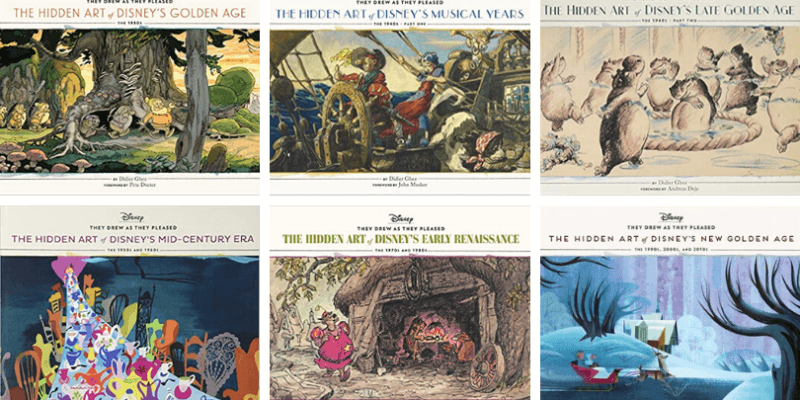 Have you ever wondered what it takes for a Walt Disney animated movie to come to life?  Well, it all started with a mouse — really, it did!  Each and every one of our favorite Disney animated movies started in the mind of a Walt Disney Studios Concept Artist.  Sometimes, the storyline comes first, but sometimes the vision of a story comes from an art piece.  Whichever way it happens, it starts with imagination.

D23 recently published a Q&A with Didier Ghez, who has highlighted the art and animation of Walt Disney Studios through his books.

They Drew As They Pleased: The Hidden Art of Disney

As mentioned, historian Didier Ghez is the man behind compiling the works of the Disney Concept Artists for these six art books.  In a recent interview with D23, this is what he had to say about They Drew as They Pleased.

“This art book series explores, in detail and decade-by-decade, the art and life of the most prolific and creative of Disney’s concept artists, relying on newly rediscovered pieces of artwork and never-seen-before documents.

Each of the six volumes contains more than 400 never-published-before pieces of artwork and focuses on the careers of artists as diverse as Albert Hurter, Ferdinand Horvath, Bianca Majolie, Sylvia Holland, or, more recently, Mike Gabriel and Michael Giaimo, thanks to previously untapped interviews, diaries, and correspondence.”

They Drew as They Pleased Volume 6: The Hidden Art of Disney’s New Golden Age

This is the last book in the series releasing on August 4th, 2020.  Just like the other books, you’ll see many concept arts that haven’t been brought to life.  The first five books included some interviews and diary entries of previous Disney Concept Artists.  This one, you’ll find new interviews with different concept artists about their work and story.  Speaking with D23, Didier Ghez comments on some highlights of the book:

“The first chapter in the book focuses on this outstanding Disney Legend, whose Disney career began in the 1930s and came to an end in the 1990s. At the start of his career, Grant worked with Disney artist Albert Hurter, who is the subject of the first chapter in the first volume of They Drew as They Pleased, taking our story full circle. The chapter about Joe Grant features countless treasures including rare documents about Joe’s work on Disney’s World War II projects, and outstanding pieces of artwork from both his careers in the 1930s (Snow White and the Seven Dwarfs, Lady and the Tramp, Dumbo, etc.) and 1990s (Beauty and the Beast, Aladdin, The Lion King).

Finally, in the sixth volume of the series, one of the highlights was the fact that I had the opportunity to select artwork to illustrate the chapter about Mike Gabriel in the presence of Mike Gabriel himself. He was generous enough to confide in my taste, but I was privileged to get his guidance while making my selections.”

Concept art doesn’t just live on the pages.  Sometimes it becomes animated movies, and sometimes they become the vision behind Disney Parks attractions like the new re-theme for Splash Mountain into Princess and the Frog and the vision for Spaceship Earth.  One concept artist from the Walt Disney Animation Studios even took to social media to bring us story time with The Little Man of Disneyland.

Comments Off on Disney Concept Art: Imagination Through the Ages