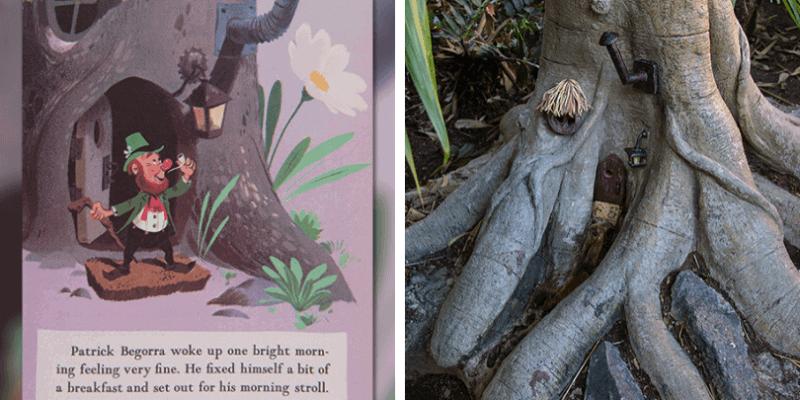 A Cast Member from Walt Disney Animation Studios is trying to lift the spirits of many Disney fans. We’re so excited that he decided to share this short story time creation because it shares a magical story that even the greatest of Disney fans might not know.

This story is narrated by Mike Peraza, and with the help of his wife, Patricia Peraza, they tell the story, “Walt Disney’s Little Man of Disneyland,” of the Little Golden Books which they used to read to their daughters before bedtime. Adapting some of the illustrations from the book by the original illustrator, Dick Kelsey, Mike and Patricia created a short video to accompany the story.

Who is the little man of Disneyland?  It is Patrick Beggora, who’s home has been at Disneyland since before Disneyland was even built.  Many may know that the land in which Disneyland Resort resides on was formerly orange groves, and Patrick’s home was in one of those orange trees.  One day he heard all kinds of commotion, and it happened to be our beloved Mickey Mouse, Goofy, and Donald Duck.  They were starting construction on what was to become Disneyland.

Mickey, Goofy, and Donald felt bad for disturbing Patrick, but decided to show him why the tree he lived in needed to be moved.  Taking Patrick to the Walt Disney Studios, he was shown the concept art for Disneyland.  In understanding that this needed to happen, he decided to move.  He moved into a secret tree that only he knew about, but is it really a secret?

You can watch the Perazas’ adaptation of “Walt Disney’s Little Man of Disneyland” in the video they created and shared to Facebook below. Thanks, Mike Peraza, for sending this in to Inside the Magic!

Since it’s difficult for our family to get together during this pandemic as it is for many, why not adapt some of our favorite picture books into little animatics that we could share via email? “Walt Disney’s Little Man of Disneyland” is one of the Little Golden Books we used to read to our daughters Kimberly and Kristin at bedtime. With Disneyland’s re-opening delayed to help insure the health of guests and cast members, we decided to share that one.Our adaptations are not animated but more like simple camera moves across the artwork. The credits title card was fun way of sharing the names of the illustrator, author and composer of the music we used. In some cases we added and repainted the book illustrations a bit to adapt from a book page image to the video format. Make no mistake though, Dick Kelsey is a legendary Disney artist who did a magnificent job. For those that have been asking, the last shot is INDEED taken from a photograph of the actual tree that Patrick resides within at Disneyland! And yes, I ran this idea of doing a collection of brief Disney themed bedtime stories by Disney+ last year, and they were not interested.We hope all children will enjoy these stories.#littlemanofdisneyland, #littlegoldenbooks,

Well, it might have been a secret at the time, but it’s no longer is.  Some Disneyland Resort Guests may have spotted Patrick Beggora’s little home, but not known the story behind it, and others might not have ever seen it at all.

After watching this video many will be on the search for it because yes, Patrick still lives on Disneyland’s property, in Adventureland to be exact, and it’s pictured in the last shot of the video!  Next time you’re at Disneyland Resort, head over to Indiana Jones Adventure and knock on Patrick’s door in a tree at the front of the queue.  While you’re out looking at the greenery of the Disneyland Resort, look for the infamous Disneyland Rose because it’s got a pretty incredible story too.

Comments Off on Story Time: The Little Man of Disneyland