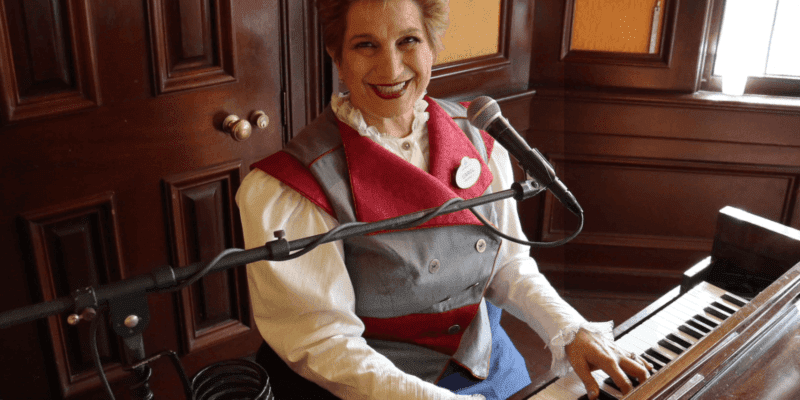 Carol Stein (also known as the Piano Lady) is a pianist player who, for over 30 years, has been part of the Walt Disney World community. Stein is a Cast Member who plays Disney songs for children at Disney’s Grand Floridian Resort and Spa as well as drinking songs over at EPCOT’s Rose and Crown Pub, located in the UK pavilion in World Showcase.

But for this first time, Stein has had to put her piano playing to a pause due to the temporary Walt Disney World park closures. The current global pandemic has forced the Disney Theme Parks to close temporarily, which means the entertainment has also come to an end (for now). Beginning on April 19, over 40,000 Walt Disney World Cast Members will be furloughed, including Carol Stein.

But that doesn’t mean the Disney Magic has to come to an end. Stein, the Piano Lady, continues to play for her fans weekly on Facebook Live!  “Hi, everybody. Welcome to my living room,” Stein said.

According to Orlando Sentinel, Stein said in an interview, “This is a very serious time, and we know that. But that’s what we as artists do — we perform. We love what we do. We want to make people happy.”

Thousands of people have tuned into her Facebook Livestreams each week, and even though she has an audience, she still misses her live audience and being in the Disney Parks.

Stein receives dozens of song requests each time she goes live on Facebook. She has played Disney classics such as Tale As Old As Time as well as the Cheers theme song and several different jazz songs — All of which her audience adores.

The Disney Cast Members, despite her current situation, does not ask for money for her Facebook Live shows. In fact, Stein says she is more worried for others who are in these unfortunate financial situations. She is extremely grateful that The Walt Disney Company is still paying her full health insurance during these unfortunate furloughs.

If you are looking for some Disney entertainment from the comfort of your own couch, check our Carol Stein’s Facebook page here.

Carol Stein is also known for her bilingual board book, Hello, My Friend / Bonjour, Mon Amie, which is based on the Disney Junior show, Disney’s Fancy Nancy.

Will you be tuning in to any of Stein’s live stream performances? Let us know in the comments.