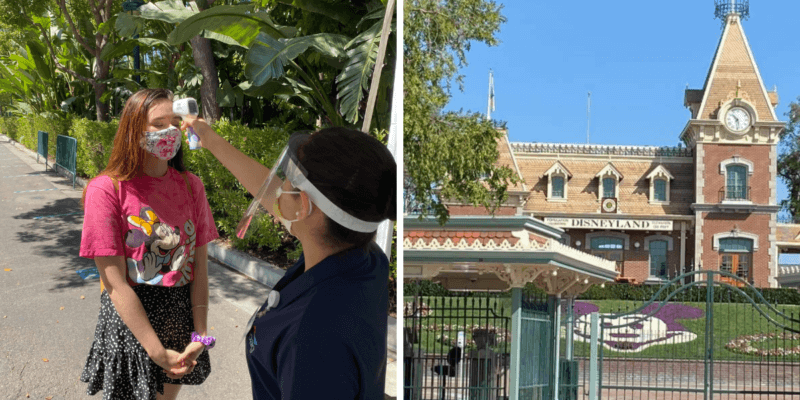 Would you get tested for COVID-19 if it meant that was the only way you could get into Disneyland and Disney California Adventure? If so, you may be in luck. There’s a chance that rapid COVID-19 testing for Guests could lead to a quicker reopening timeline for California theme parks.

At the time of this article’s publication, the current guidelines for reopening theme parks under California’s Blueprint for a Safer Economy state that all large theme parks — including Disneyland Resort and Universal Studios Hollywood — cannot reopen until the counties in which they are located reach the “minimal” yellow tier (or tier 4). This tier can only be reached when that county has less than 1 daily new COVID-19 case per 100,000 people.

But what could make Newsom’s administration decide to go back to the drawing board, revise reopening guidelines, and allow all theme parks the opportunity to reopen when their respective counties reach the orange tier, tier 3? Perhaps rapid COVID-19 testing is the answer.

OC Register reports that theme parks like Universal Studios have conducted surveys asking Guests for their thoughts on rapid COVID-19 testing. According to a leaked survey shared by Orlando Weekly, Universal Orlando may be considering implementing rapid COVID-19 tests for all Guests and Team Members. And considering the fact that Universal Studios Hollywood in Los Angeles County is currently residing in the purple tier, wanting to reopen in the orange tier, and asking the governor to reconsider, it would make sense for the theme park to use rapid COVID-19 testing as a way to hopefully get the governor on their side.

Rapid COVID-19 tests — which show results in 15 minutes — are not widely considered to be the most accurate test option when determining whether or not someone has the virus, but they are more accurate than a simple temperature check. Temperature checks are already required at Downtown Disney at Disneyland Resort and CityWalk at Universal Studios Hollywood. But with rapid COVID-19 testing, theme parks could better prevent infected Guests from entering and therefore hopefully decrease the spread.

UCSF has stated that rapid COVID-19 testing can rapidly help identify individuals who exhibit no virus symptoms but could still be highly contagious.

Keep in mind, however, that while rapid testing varies in price, it can be costly.

Will Theme Parks Implement this?

The OC Register notes that rapid COVID-19 tests are being used more and more around the world at hotels, casinos, cruise ships, colleges, public school districts, and even airports. We reported just a couple of weeks back that many airlines and airports believe that the answer to getting more passengers back in the air is to implement rapid COVID-19 testing. So it wouldn’t be far fetched for theme parks to begin doing the same.

The idea was even brought up by Visit Anaheim President and CEO Jay Burress during an exclusive interview with Inside the Magic. Burress brought up the notion of rapid COVID-19 testing being required before Guests enter a theme park or convention center. This isn’t something that was incorporated into Governor Newsom’s reopening plan for theme parks and large venues, but many certainly believe it should be considered as a way to help these industries return.

Disney has not said that they will be implementing rapid COVID-19 testing at any of their domestic parks. Many think this could be the answer to not only reopening Disneyland and Disney California Adventure sooner but also preventing the possible spread of the virus at Walt Disney World Resort, which has been open since July.

We’ll report back with more information on this topic as it is released. But for now, we ask: would you get COVID-19 tested if it meant you could enter Disneyland Resort?