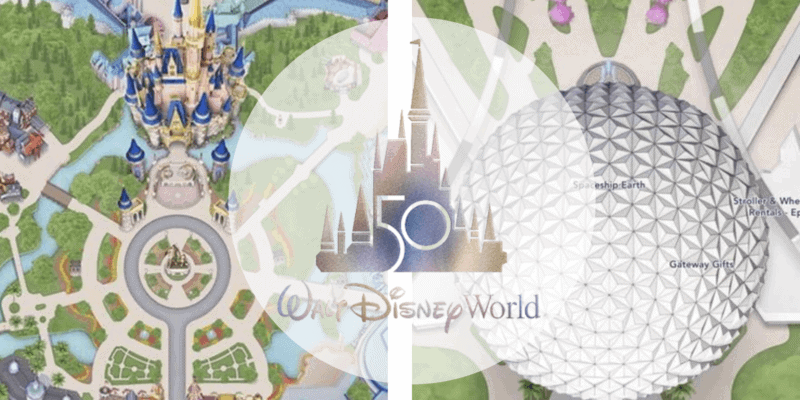 Details of Walt Disney World’s 50th anniversary celebration may be kept largely under wraps, but we do know that some pretty big construction projects are in-the-works ahead of the event.

Cinderella Castle, of course, already underwent a royal makeover and other projects — including EPCOT’s massive reimagining — are still happening, with some changes, in spite of the coronavirus pandemic.

Now, Disney’s tech team has majorly updated the digital park maps within the My Disney Experience app to reflect some recent work that has happened in various locations around Walt Disney World Resort property.

The first change has to do with the castle — the Cinderella Castle graphic on the Magic Kingdom map has been updated to reflect the Disney Parks icon’s brand new rose pink and royal blue color scheme!

Another change to Disney World’s digital maps is the addition of the brand new EPCOT entry fountain, which is located directly in front of Spaceship Earth.

The fountain joins EPCOT’s stunning new pylon installation as part of the development of the World Celebration neighborhood.

World Celebration — which will join World Nature, World Discovery, and the existing World Showcase — has been described by Disney as a place where Guests can savor “new experiences that connect us to one another and the world around us.”

The final big change to the My Disney Experience map — that we have noticed so far — is the addition of the brand new walkway between Disney’s Grand Floridian Resort & Spa and Magic Kingdom theme park.

Having had the opportunity to use the new walkway right after it opened last week, I can attest to the fact that this a great new option for Guests! The walk is quite pleasant and provides a safe, outdoor, socially distanced way to travel from the Grand Floridian hotel to Disney World’s castle park during the pandemic era.

What do you think about these My Disney Experience Disney World map updates? Are you looking forward to more changes before The Most Magical Celebration on Earth?

If you would like to plan a 50th Anniversary trip to any of Disney World’s four theme parks — Magic Kingdom, EPCOT, Disney’s Animal Kingdom, or Disney’s Hollywood Studios — let the expert team at Academy Travel help you plan every magical detail!