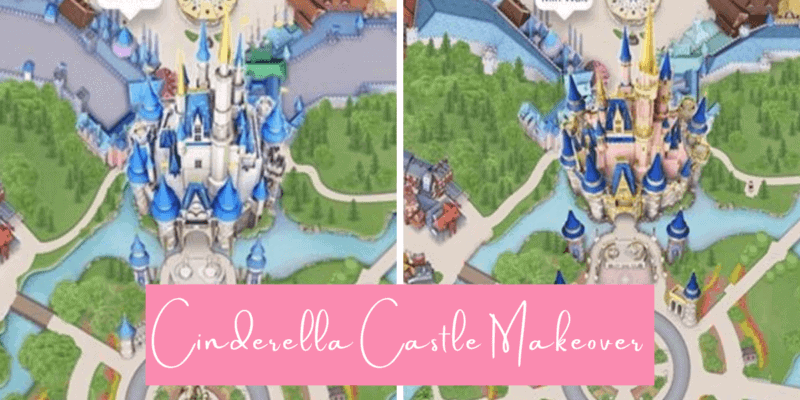 Disney has recently updated the My Disney Experience app to reflect the new paint colors on Cinderella Castle! It might be something small, but there is something so satisfying seeing the amount of detail that Disney takes in everything they do. Let’s check it out!

As you know recently Cinderella Castle underwent a serious change as it was recently painted with new pink and gold tones. This is part of many similar projects around the resort for the anticipation of the 50th Anniversary Celebration of the Walt Disney Resort.

Here is a real-life photo of Cinderella Castle with its new look:

From this angle, which is the back of the castle you can really see just how much gold detailing was added to Cinderella Castle, which ultimately makes the structure even more ornate.

Here is what the castle looks like on the My Disney Experience app:

And here’s how the castle looked in the app before the new update:

Many fans were mixed about the change, but never the less Disney has painted the castle and it is still certain to bring a twinkle to your eye the next time you visit Magic Kingdom.

In addition to this Disney has also repainted the entrance to Magic Kingdom to reflect the new colors on Cinderella Castle. This really helped tie the concept together and we love how the fresh coat of paint looks around Magic Kingdom. It will look fantastic for the 50th Anniversary Celebration!

But Disney did not stop there, all of the entrances to the Disney World property will be getting a makeover in a similar fashion! So far they look great, and again, fresh paint has really brought those signs back to life.

Will you be celebrating the 50th Anniversary of Walt Disney World inside Magic Kingdom? Let us know in the comments!

We can help you plan your trip to Walt Disney World for the 50th Anniversary Celebration of the resort, click here for more information.

Comments Off on The My Disney Experience App Just Got A Pink Surprise!