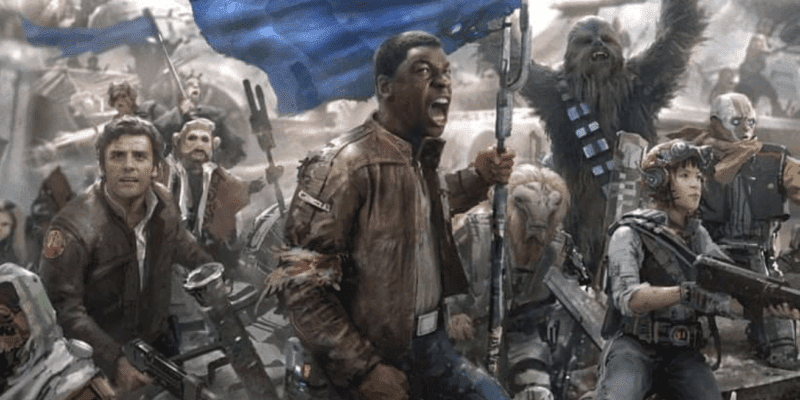 Earlier this year, Star Wars actor John Boyega stirred up quite a bit of controversy between his involvement in Black Lives Matter protests in London and his insistence that his sequel trilogy character, Finn, was pushed to the side in the Star Wars universe.

Now, Boyega is making the rounds on the interview circuit to discuss his new project Amazon Prime streaming series Small Axe — and he is inevitably being asked about his most famous role, the ex-Stormtrooper. In a recent discussion with Yahoo! Entertainment, Boyega was asked what storyline could have kept the final three films in the Skywalker Saga more focused on Finn.

“You’re the first journalist to ever ask me about that,” he says, with obvious excitement. “So I’m kind of realizing what would have been.”

The article continues with details about how Finn was originally supposed to be incorporated into Star Wars: Episode IX:

…Finn’s status as a revolutionary was an even bigger part of the Episode IX that never was: Colin Trevorrow’s Star Wars: Duel of the Fates.

The Jurassic World director was initially supposed to be behind the camera for the ninth Star Wars episode, before departing the film in September 2017. Abrams and his collaborator, Chris Terrio, subsequently rewrote the story from the ground-up…

Several months ago, Collider shared original concept art from Trevorrow’s version of the final installment in the Skywalker Saga. Here, we see Finn leading the charge with the Rebellion’s blue flag in hand. He backed by Poe Dameron (Oscar Isaac), Chewbacca (Joonas Suotamo), and Rose Tico (Kelly Marie Tran), among others.

Boyega shared his passion for this scene that never was with Yahoo!, saying:

“I think Colin Trevorrow was going to tell that story,” Boyega says now, acknowledging that he’s seen — and loved — the unused concept art for Duel of the Fates. “That image of Finn with the blue flag, and you have the AT-ATs lined up with tribal marks, and the stormtroopers take off their helmets. That would have been sick! That would have been dope, man, hands down.”

Although the actor has indicated he is done with his Star Wars role, he also indicated that there’s a small glimmer of hope he would reprise as Finn in the future — especially if he worked on an animated series à la Star Wars: The Clone Wars or Star Wars Rebels.

“I’m a Mandalorian fan, so Lucasfilm is doing very well with the TV shows,” he says, laughing. “An animated show would be dope! We could do it from home.”

Do you think there’s a chance John Boyega could actually return to a galaxy far, far away with Disney’s new focus on Disney+ streaming content, particularly within the Star Wars universe?