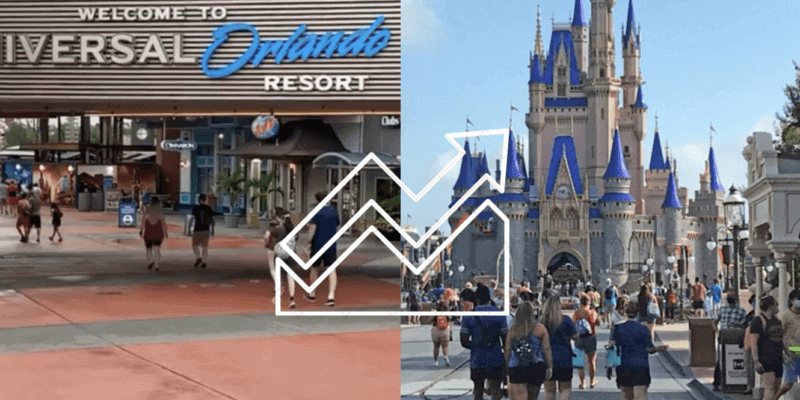 We are living though unprecedented times when it comes to theme parks, and really, everything else. If you have visited the Orlando area in the past to go to either Disney World Resort, Universal Orlando Resort, or both, you know that crowds are a given. During a pandemic however, the theme park industry has had to change.

Guests visiting theme parks have rarely had to think about encountering a park hitting capacity. That used to be more of a myth that only happened on Christmas Day or New Years Eve. Now, it is the current reality for theme park goers. In order to promote social distancing and enhance guest safety, having less people allowed into parks has been the solution. With Halloween in full swing at both Disney World and Universal, it has been interesting to see how crowds are flocking to the parks and which parks they are choosing to attend.

Universal Orlando Resort which includes Universal Studios and Universal’s Islands of Adventure, has been seen to boast high crowd levels and high wait times. Over the Labor Day holiday weekend, Shrek 4-D hit wait times of 145 minutes which is a mystery in itself. This was likely due to social distancing in the theatre that was needed, but wait times and crowd levels were higher than ever.

This was the crowd level at Universal Orlando Resort at capacity just around a month ago.

Here is a photo of a similar area of Islands of Adventure from a few days ago:

Thrill Data took to Twitter to point out that Universal Orlando wait times have seemed steady over the past two weeks with wait times averaging around 25 minutes at Islands of Adventure and 35 minutes at Universal Studios. The increase at Studios is likely due to the 2 open Halloween Horror Nights houses: Universal Monsters: The Bride of Frankenstein Lives and Revenge of the Tooth Fairy. With HHN not really happening this year, having 2 houses available that are included with you admission is something that would definitely drive guests to the park, but it seems that crowd levels have tapered off slightly.

Not only does it seem that wait times are more steady, but we can see that City Walk is looking a lot more social distanced than we have seen in the past. The below Instagram post shows some very clear social distancing going on on this section of the resort.

If you want to check out what crowd levels have looked like in the past — see this photo of City Walk on a busy September weekend:

But hey……we need to make sure we can STAY SAFE and vote by mail so we don’t have to risk our lives! #universalstudios #MailInVoting #6feet#SocialDistancing #SocialDistance pic.twitter.com/OYPP0SVzE4

Tammyforfun also took to Instagram to post Diagon Alley from The Wizarding World of Harry Potter, where crowd levels seem to be more manageable as well.

Universal Studios Harry Potter and the Escape from Gringotts. One of the best dark rides in Orlando ,Fl. The queue by itself is an experience. Incredible! Very smooth ride.

Since early September, Universal is now loading certain attractions without social distancing such as The Incredible Hulk Coaster, Hollywood Rip Ride Rockit, and Rise of Kong so that may be a way to eliminate previously higher wait times at the park. It is interesting to note that even with the HHN offerings being available to Universal fans who were saddened by its cancellation, crowds have not seen a huge spike or increase. Universal has even put out a survey to guests asking when they would visit Walt Disney World next to compare the visiting habits of their guests.

Yesterday we reported that Disney World on the other hand did open to larger crowds! Disney has yet to increase their capacity but it seems that their wait times and crowds have grown since their July reopening. Minutes after opening Slinky Dog Dash went up to a 100 minute wait, and Star Wars: Galaxy’s Edge saw larger crowds.

A post shared by DisFamily Adventures (@disfamily_adventures) on Oct 5, 2020 at 7:19am PDT

Magic Kingdom however saw an average of around 40 minute wait times. It is interesting to note that the Disney theme park with the most Halloween offerings including decorations, cavalcades, and the ability to dress up in your Halloween costume, does not seem to be the busiest Disney park in terms of wait times.

It seems that the waits in Walt Disney World have climbed enough that some Guests want to see FastPass+ return.It is important to remember that Disney is social distancing on attractions as well as cleaning between riders which will allow for much longer wait times as the result.

Remember when Disney purists were like, FastPass ruins the experience and makes lines longer! The parks are at reduced capacity and waits are crazier, but ok, keep jabbering. pic.twitter.com/s7nvC4ilJH

Booking a Disney day also now requires you to have a park reservation. Without one, you cannot enter and with reservations selling out fast, you have to plan your park trip in advance.

So which is busier?

It seems that depending on the day, either Disney World or Universal Studios could be busier than the other, especially with such different Halloween offerings being available at each resort. However from what we can see based not only on wait times but crowd photos, it seems that crowds may be flocking to Disney more than Universal Studios. With Governor DeSantis allowing for parks to increase capacity, it will be interesting to see if and when either parks returns to a more normal level and what that looks like compared to now.

Do you think it has been busier at Universal Orlando or Disney World lately? Let us know below!