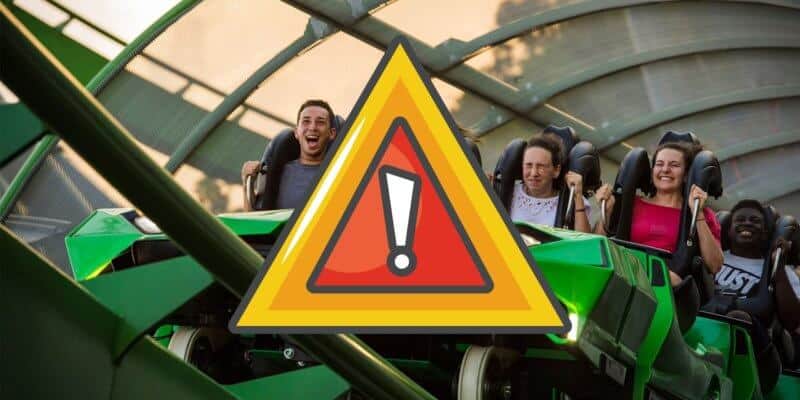 Update: Universal Orlando has released a statement regarding the social distancing on rides and Inside the Magic has since updated this article to reflect the statement.

With Universal Orlando theme parks reopening in Florida during a pandemic, we have seen many changes for safety reasons. From reduced capacity to families having their own attraction vehicle on certain rides, this pandemic has created somewhat of an intimate theme park experience.

All three parks re-opened back in June 2020 after closing down due to the pandemic. Unlike Walt Disney World, Universal Orlando does not require you to use a reservation system. This means as long as the park is not at capacity, you can show up day of and have a day of fun!

But lately, Universal’s crowd levels are skyrocketing. After seeing the insane Labor Day crowds all three parks brought in, many Guests were nervous to return due to the inability to social distance. Well get your hand sanitizer ready because it looks like they are no longer social distancing on a couple of attractions.

On Twitter @Amusementinside stated along side a clip of The Hulk ride:

HULK is now loading one party per row instead of every other, making the wait time much lower. New barriers in place at the station so groups are not interfering with each other. Personally I like this change.

HULK is now loading one party per row instead of every other, making the wait time much lower. New barriers in place at the station so groups are not interfering with each other. Personally I like this change. #universal #studios #islands #of #adventure pic.twitter.com/EQrnKWNYN1

The Universal attraction used to seat one party/family every other row, making sure that no two parties (who were not visiting together) were next to each other and remained a safe social distance away from one another while enjoying the attraction. It seems that there are still precautions being taken here in terms of the queue area and loading, as the Tweet states “New barriers in place at the station so groups are not interfering with each other.”

It also looks as though you still won’t be sitting next to a stranger in the same row, but the fact is — you are no longer one full row apart from other families. Face coverings and masks are still mandatory at the Universal Orlando theme park, as well as temperature checks upon arrival. Of course, social distancing measures are encouraged when walking around the Universal Florida parks, just not so much on the ride itself.

We have been planning toward this for months as part of the next step of our reopening procedures, and we are applying everything we have learned so far. We've briefed local health officials about our plans, and they have let us know they are comfortable with us moving forward.

Hi Cristian! We are making a modification to our loading procedures for The Incredible Hulk Coaster and Hollywood Rip Ride Rockit. To accommodate Guest demand, we will load every row of the vehicle while still ensuring there is separation between Guests onboard.

According to this update, it looks like the The Incredible Hulk Coaster and Hollywood Rip Ride Rockit will be two of the rides that will be loaded fully. This is due to guest demand and long wait times, and Universal Orlando has ensured that there still is some separation between guests. The Tweet indicates that local health officials have agreed to this new plan.

Since Universal Orlando tweeted that the 2 coasters were the only attractions boarding each row, we have seen on Twitter that that is not necessarily the case.

Reign of Kong is now loading every row, with new plexi dividers in the loading area & on trucks. Change appears to have improved capacity (only 15min posted standby wait) but reflection wreak havoc with the 3D, and all water fx are disabled. #IOA ^@skubersky pic.twitter.com/M8SJ8J4slL

In the case of Reign Of Kong, the plexiglass being up definitely makes up for the rows being fully loaded on each attraction vehicle. It has reduced wait times for the attraction as well, but it seems to have disrupted the attraction experience with 3-D no longer working well due to the glass, and FX turned off.

Universal has also reiterated that Guests are required to wear face coverings and distance themselves within the attraction queues. Because loading every row of a ride vehicle is only occurring when there is a high demand, it is unclear how often this will happen.

Hey there Tanya! We are making a modification to our loading procedures for The Incredible Hulk Coaster and Hollywood Rip Ride Rockit. To accommodate Guest demand, we will load every row of the vehicle while still ensuring there is separation between Guests onboard. ?

Social distancing and face coverings will still be enforced at these attractions, and our other attractions are operating with the same enhanced procedures as they were when we first reopened. Feel free to DM us with any additional questions. ? https://t.co/exi368FzID

Would you feel comfortable riding a coaster at Universal Orlando if every row was full? Let us know!