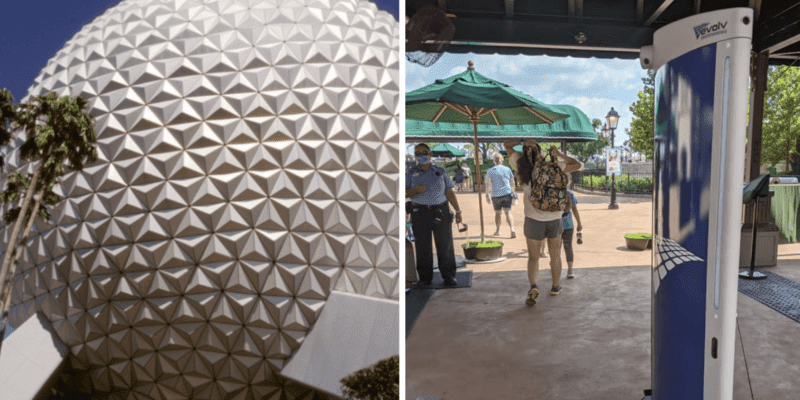 Since Walt Disney World Resort began its phased reopening process on July 11, Disney Parks officials have been consistently making changes to make sure the Guest experience, limited though it is right now, is as efficient (and magical!) as possible — while always, of course, keeping health and safety in the forefront!

From mobile queueing at table service restaurants to the addition of plexiglass dividers between parties on various rides and in some dining establishments, Disney is taking their reopening safety measures seriously, particularly as we approach the always popular holiday season.

Related: Visiting Disney World for Christmas? Here Are the Hours!

Now, an ITM team member has noticed a new change at Disney World’s EPCOT theme park — a contactless security system has been implemented!

If you’re used to the usual Disney Parks security process, which involves a security team member looking through bags by hand, you will undoubtedly notice that this new process is less invasive.

Instead of having to come into physical contact with a Cast Member, Guests who are entering EPCOT simply walk through the new contactless security system, which can be seen in more detail below.

Disney has also installed this new contactless bag check security process at Disneyland Resort’s Downtown Disney District. Presumably, it will eventually be making its way to all Disney Parks and shopping and dining complexes, such as Disney Springs.

This is just one of the many ways Disney is innovating as they operate during the pandemic. Disney theme park officials have not yet commented on whether or not the contactless bag check system will be a permanent fixture at Walt Disney World and Disneyland or if manual bag checks will eventually return. The latest comment made by Disney officials indicated that they are currently testing this contactless system, but we will report more information as we receive it.

What do you think about contactless security at Disney World?

Let the Academy Travel experts help you plan your next magical trip to Magic Kingdom, EPCOT, Disney’s Animal Kingdom, or Disney’s Hollywood Studios. Contact them today for a free quote!