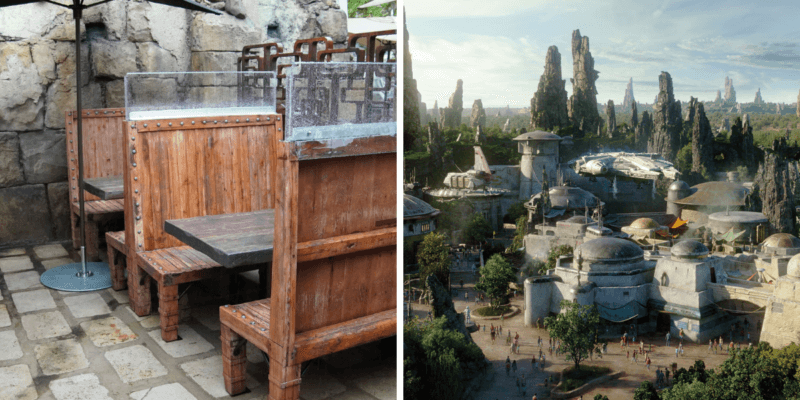 Walt Disney World has continued to add more plexiglass dividers around its theme parks now that they are reopened.  As seemingly more and more people are beginning to return to Walt Disney World each day, the need for continued health and safety measures is apparent.

We have this photo shared on Twitter by @bioreconstruct of plexiglass being added to Docking Bay 7,

Docking Bay 7 is a quick-service dining location found inside Star Wars: Galaxy’s Edge at Disney’s Hollywood Studios. The photo shows a picture of the outdoor seating section which received plexiglass to help divide guests as they enjoy their Star Wars-themed meal. You can read our full breakdown of the offerings at Docking Bay 7 here.

There are additional instances of plexiglass being installed around the park to help guests maintain social distancing, and stay safe during their visit to Walt Disney World.  We reported on the plexiglass dividers being added to the Peter Pan’s Flight attraction at Magic Kingdom earlier this week.

We also saw Disneyland adding plexiglass dividers to the entrance turnstiles of its theme parks, presumably for the anticipated reopening of Disneyland and Disney California Adventure. We do not have any confirmed date on when Disneyland will reopen, but we will continue to report on any goings-on at the park.

Before you visit Disney World it is important to check out their website in order to familiarize yourself with all of the operational changes inside the park. You can also take a look at our coverage and comparison of Walt Disney World before and after the changes made to the parks for reopening.

We do expect Disney to continue to add plexiglass to various locations around the park, so stay tuned for more information.

What do you think of the additional plexiglass being installed around the Walt Disney World parks? Let us know in the comments!

Plan your Walt Disney World vacation with the help of our expert travel planners!