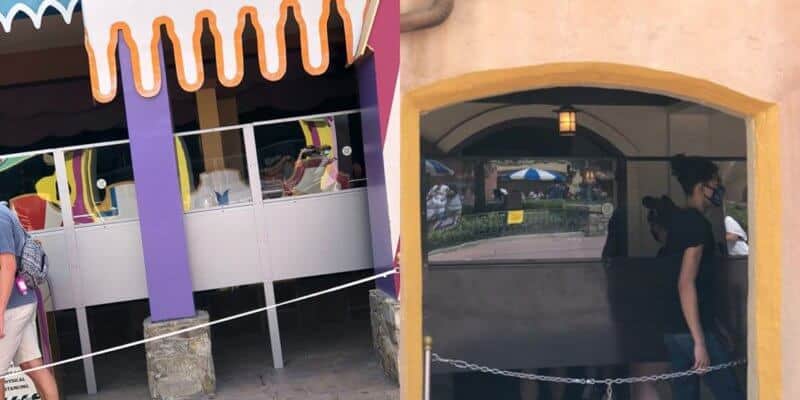 With crowds growing at the Disney Parks, lines have understandably grown longer. Extended queues are visible at almost every major attraction as lines are not only filling more, but must also be social distanced between each grouping of Guests.

To combat this, Disney has been using plexiglass as a divider in queue lines to combat the wrap around style that most line ups have, which often leave different groups of Guests side by side. Until now, we have not seen these plexiglass barriers at Disney theme parks coming out of their attractions to be heavily visible to Guests. But as we previously mentioned, with extended queues becoming the norm, precautions have had to be taken.

Peter Pan’s Flight at the Magic Kingdom is one of the most popular attractions at Walt Disney World. Prior to the pandemic, the attractions extended queue was almost always used as Guests wanted to hop in a ship with Peter Pan, fly to Neverland, and watch Captain Hook be defeated. The attractions colorful scenes, reimagined queue, and classic storyline lends itself to being a perfect family ride for Guests of all ages! With the extended queue being back in action, Disney has had to modify the exterior of the attraction to adhere to their safety protocol.

Since the attraction queue is open for the beginning portion, the guests who are under the attraction enclosure and those who are in the extended queue are only shoulder distance apart. To fix this, Disney has installed more plexiglass to cover the opening of  the Peter Pan’s Flight queue at Magic Kingdom. This allows the extended queue to be used safely, and allows for more Guests to have the opportunity to wait in line and ride the attraction.

With so much plexiglass going up on this attraction, Disney has also implemented do not touch stickers on the glass to ensure Guests are keeping the surfaces as clean as possible.

Will we continue to see more plexiglass in Disney World?

Although Disney has not yet said anything, with Governor DeSantis lifting capacity restrictions for theme parks, Walt Disney World will have the opportunity to increase their current limited capacity. Disney has not mentioned that they will be lifting capacity at any of their theme parks in Orlando, Florida, but if they do, more extended queues will be needed, and more plexiglass will need to go up.

It will be interesting to see how Disney combats these changes as the theme parks return and adjust to the new ‘normal’ operations during a pandemic. Stay tuned to Inside the Magic to continue to hear details on how Walt Disney World theme parks are changing daily!

Does the plexiglass change your park experience? Let us know!