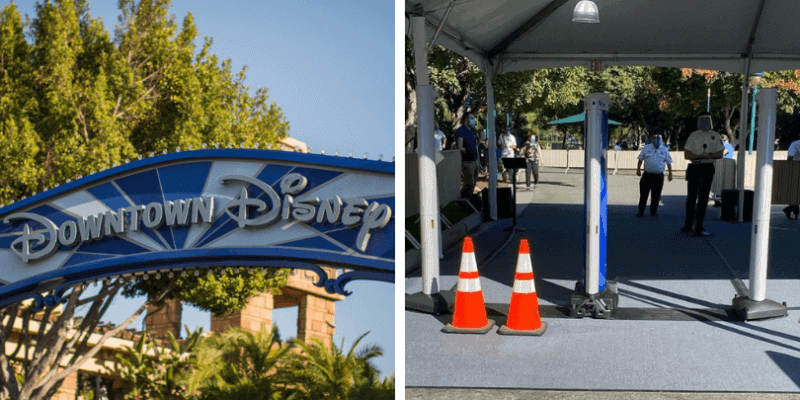 We’re in the age of the as much contactless as possible, maintaining physical distancing, and making sure our temperature is checked. Though it’s not the first time we’ve heard about this new security technology being associated with Disney, we’re finally seeing it in reality at the Disneyland Resort.

A Downtown Disney District Guest shared on Instagram that there was new security equipment installed at the entrance to the Disneyland Resort, and it is reported to be the same as what has been proposed for the Walt Disney World Resort over the past few months.

The new artificial intelligence security equipment we reported a few months back can detect your temperature as well as any weapons that a person has in their possession. This eliminates the process of having a Disney Security Cast Member search through every pocket of your bag or backpack that you bring into the hotels, theme parks, or Downtown Disney (which is the only area of Disneyland Resort that has reopened so far).

Therefore, this means that there would potentially be no more contact while maintaining a safe physical distance. The even better news is that equipment like this should alleviate the wait times in the queue of security a bit so Guests can get to the parks and Downtown Disney quicker!

Theyre using new technology now in downtown disney to detect for weapons and anything else you shouldnt have. This is the same type of machine used in Walt Disney World. Its quick and they dont need the dogs anymore

Below is what Disney had to say about the new security system, per OC Register:

Disneyland is testing the new security system this weekend at the Downtown Disney District, according to Disney officials.

The Disneyland resort takes a comprehensive approach to security and will continue with bag checks and other security measures before entry into the Downtown Disney district as the new system is tested, according to Disney officials.

Note that we don’t know much else about this security system in place at Downtown Disney, and all Guests should continue to comply with all of the rules in place at Disneyland Resort. Temperature checks are still required to enter Downtown Disney and will presumably still be required with Disneyland and Disney California Adventure reopen in the future.

Though this is at the entrance into the Downtown Disney District only at this time, we may expect to see this at other security checkpoints once Disneyland Park, Disney California Adventure, and the hotels reopen. As soon as we are able to test out this new security checkpoint for ourselves on our next visit to Downtown Disney — or as soon as Disney provides any updates about it — we’ll share more information.

Though there hasn’t been an updates on when that will be, California Governor Gavin Newsom did postpone reopening guidelines for Disneyland and other California theme parks. Over the past few months, we’ve seen a lot of preparations made at the Disneyland Resort such as plexiglass being installed and social distancing markers being put in at the park entrance turnstiles.

Disney is still working very hard to prep for a safe reopening when it does happen. Amid all the sad news of Cast Member layoffs this week, hopefully the parks will get the go-ahead to reopen soon and many Cast Members can resume work. The magic doesn’t happen at the Happiest Place on Earth without them!

If you’re looking for some help in navigating all the new changes on your next Disneyland Resort trip, reach out to the experts at Academy Travel!

Comments Off on New Bag Check System at Disneyland Security!