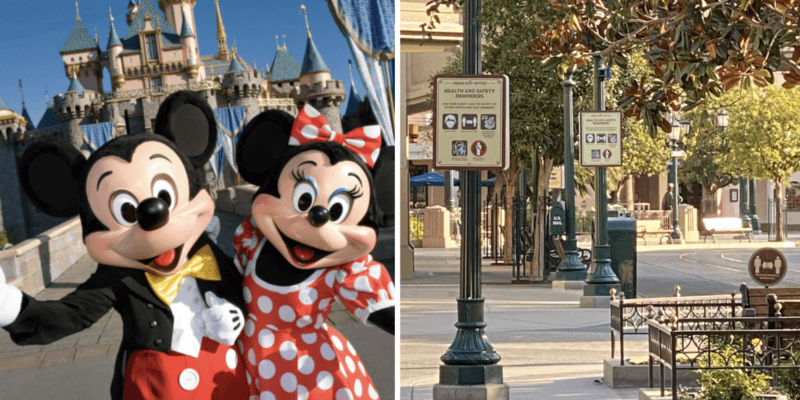 At this juncture, Disneyland fans are grasping at anything that could signal an imminent reopening announcement. This week, several key changes outside of Disneyland Resort have would-be park goers Spidey senses tingling.

The Mickey Mouse floral arrangement has been spruced-up with new blooms, a possible video featuring Cast Members was being filmed today, and the Mattercam captured workers performing maintenance on the Incredicoaster at Disney California Adventure Park.

Now, we have more Disneyland reopening prep to share. Twitter user @ParksandCons shared photos of social distancing tape by some entry turnstiles and new health and safety signage inside of Disneyland’s theme parks.

It is important to note that the social distancing tape and the new health notices were added sometime this week, but are not new today.

Essential Disneyland Cast Members have been hard at work throughout the theme parks’ over 6-month-long closure, ensuring that everything is in order for the original Disney Resort’s eventual reopening.

What Do we Know About Disneyland’s Reopening?

Disney Parks fans around the world are waiting with bated breath to learn when California Governor Gavin Newsom will decide to reopen Disneyland in Anaheim. All other Disney theme parks around the world, including Hong Kong Disneyland (which will reopen for the second time tomorrow), have begun their phased reopening processes.

During Governor Newsom’s last press conference on the subject, he stated that a Disneyland announcement would be coming “very, very shortly.” Since then, however, Walt Disney Company Chairman of Parks, Experiences and Products Josh D’Amaro and Disneyland Resort President Ken Potrock have both appealed to Newsom for reopening guidelines from the state.

No reopening date has been announced by Disney Parks officials or Governor Newsom’s office.

What are your thoughts on the latest Disneyland reopening preparations?