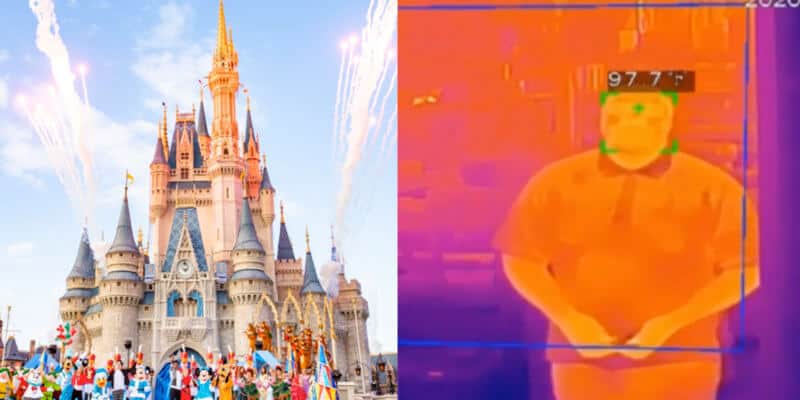 It seems Walt Disney World may be looking to update its safety measures in a way that can also streamline the temperature check process as the company is now utilizing technology that can do both at the exact same time.

According to a new report by WESH 2 News, it seems a company by the name Evolv Technology is claiming its Evolv Express does just this. They say the machine scans for firearms and other weapons using artificial intelligence and is also capable of reading a person’s body temperature. Additionally, the system also includes an optional facial recognition system.

The machine is capable of screening over 3,600 people per hour and is already utilized by Six Flags Oklahoma City Park for similar purposes of mass screening guests for both weapons and their temperatures–as seen in the screengrab below.

Six Flags says the company is planning to use these machines at all of its 25 North American theme parks as a method of implementing mass temperature checks into their admissions process for all park guests.

A Disney employee, who did not wish to be identified due to the fact that he wasn’t authorized to comment on the system, told WESH 2 News the Evolv Express was tested over the weekend in the parking garage of Disney Springs.

However, the employee was unable to say which, if any of the equipment’s features would be used in the theme parks upon their reopening.

It is true that Walt Disney World sees tens of thousands of guests per day at each of its major theme parks in Central Florida. For this reason, implementing a streamlined system like the Evolv Express could greatly speed up the temperature check process all guests will have to face come the reopening of the theme parks on July 11 and July 15.

What are your thoughts on Walt Disney World possibly utilizing this new system that is capable of checking for not only dangerous weapons but also a person’s body temperature at their theme parks? Let us know in the comments!

Comments Off on Disney May Utilize New Security System to Check Temperatures, Bags