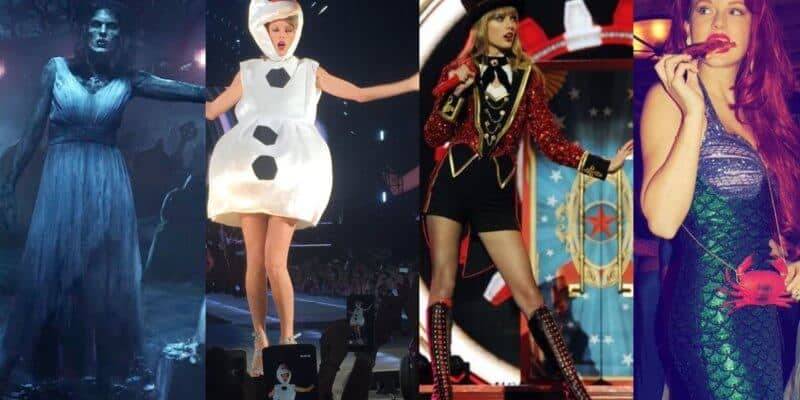 If you love Taylor Swift and Disney, you better get ready to be blown away. The ‘Folklore’ artist is one of the biggest performers of our generation. Taylor Swift has brought us hit after hit, giving us some of the catchiest tunes, and leaving us with songs stuck in our head.

On Twitter, a ‘Swiftie’ @Nolaswiftiee compiled the best Taylor Swift photo-op thread I have ever seen. We can now see every outfit Taylor Swift has worn that resembles a Disney attraction. Most of these are honestly fantastic Disneybounds. Whether or not that was intended is another question, but they are so on point that we need to talk about them.

Voyage of the Little Mermaid

Okay so lets start off with The Little Mermaid. Here we can see Swift rocking a Ariel inspired body-con dress. Also, I can just imagine her singing “Look at this stuff, isn’t it neat?” to that slice of pizza.

Alright so TGMR may be replaced by Minnie and Mickey’s Runway Railway, but this outfit perfectly matches this scene from the late attraction.

Do you wanna build a snowman? Olaf and Taylor Swift say YES. This one is just obvious — Swift is literally dressed at our favorite snowman and it feels like we are heading to the Norway pavilion at EPCOT now.

Related: Olaf’s Backstory To Be Revealed In NEW ‘Frozen’ Short

So this is the best and most iconic Disney bound Taylor Swift could do because her version of Kilimanjaro Safari’s over at Animal Kingdom is not mud and kachkis, but this gorgeous yellow dress.

Living With the Land

@Nolaswiftiee this would have been a tough one to point out but oh boy is it a good one. It looks like Taylor is sitting right outside the house in Living With the Land. From the windows to the doors, it looks like she may have even shot the music video here!

Yes captain we ARE ready for take off. Taylor definitely has a pilot vibe coming off of this outfit. The blue and gold skirt really pulls the look together and we can totally imagine Taylor getting us ready to take our flight around the world.

Pirates Of The Caribbean

Jack Sparrow, step aside. This fall look doubles as a pirate bound at we love it! The flowing and ruffled sleeves is what really solidifies the pirate look in this one, she just needs a bottle of rum.

Let’s take our limo over to Disney’s Hollywood Studios because Taylor Swift is literally in the band. Signing next to Steven Tyler makes this the perfect comparison, and it also makes me want backstage passes to this show!

Let’s head to the west for this Disney bound. Taylor is a damsel in distress in this photo with a big train coming her way! What train could that be? Perhaps Big Thunder Mountain at Magic Kingdom. It doesn’t fit the story line of this attraction but the western look is on point.

Is this Taylor Swift or Constance Hatchaway? Seriously this look deserves to be in the Haunted Mansion graveyard scene now!

Taylor Swift is serving us her best Nigel Channing look in this photo! Next up I would like to request a cover of ‘One Little Spark’ played on a ukulele.

Taylor is looking like ‘the prettiest girl in school’ with this look! The abstract grey pattern looks just like the EPCOT ball and I want it on my body now. Thanking the Phoenicians for this one.

This. Is. Perfect. I think Timothy has some competition on his hands with Taylor looking this perfect in her circus ringleader look. She fits into Storybook Circus at Magic Kingdom exceptionally well.

I might not love spinning in these cups but I would love to dress like I was! Taylor looks like she is attending her own tea party but that big puffy skirt also makes her look like the tea cups!

Big Al? More like Big T! Who else would love to see Taylor Swift get on stage with the rest of the Country Bear Jamboree gang at Magic Kingdom?

This photo is screaming Cinderella. From the perfectly flowing dress on the castle steps, all Taylor needs to do is leave a glass slipper behind.

So there you have it – Taylor Swift is basically every single Disney attraction and we love it!

What was your favorite look? Let us know below!