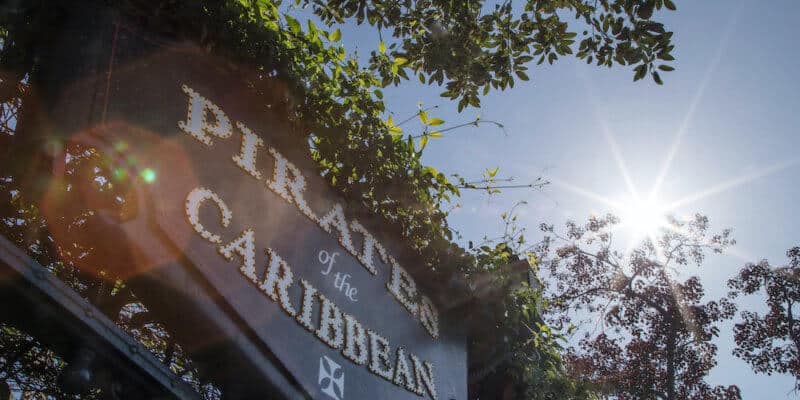 Arg! It be ‘Talk Like a Pirate Day’ and Disney Parks Blog set sail on a very special Disney Magic Moment, taking us to the Pirates of the Caribbean attractions at every Disney Park.

Ahoy, me Disney-lovin’ hearties! We’re weighing anchor on our celebration of “International Talk Like a Pirate Day” with a treasure chest o’ photos featuring the Pirates of the Caribbean attraction- past and present – from ‘round the world.

Avast! Whether it’s swabbies walkin’ the plank at Disneyland Resort or me mateys hoisting the colors at Disneyland Paris, everyone – even a landlubber – says “YAR” when sailing The Pirates of the Caribbean.  So, for this special day, we be diggin’ o’er and under to spy Pirates magic for everyone at home!

Dead men who “tell no tales” started talkin’ at this classic attraction at Disneyland Resort in 1967.  And ye may not know but Disney Imagineer X Atencio, who wrote “Yo-Ho (A Pirate’s Life for Me),” is the voice of the Jolly Roger skull and crossbones, before ye plunge down the first waterfall.

At Disneyland Paris, adventurers make two plunges down waterfalls during voyages that include a variety of scallywags and swashbuckling buccaneers.  Few pirate fans know that dialogue for the main characters, such as the auctioneer and pirate captains, is in French and others speak English and Spanish.

From a face-to-face with some of the world’s saltiest sea dogs to dreaming of doubloons, you’ll surely “shiver ye timbers” during a Pirates of the Caribbean adventure at Shanghai Disney Resort. And hold on to ye eye patch – each vessel twists, twirls and steers backwards while navigating treacherous waters!

Beware!  It’s a pirate’s life for you when taking a voyage to the 17th century with rowdy rogues and ruthless rapscallions at the Walt Disney World Resort. Be sure to keep a spry eye out for Captain Jack Sparrow during each adventure.

If ye be seekin’ adventure, ay—you’ve found gold when riding Pirates of the Caribbean at Tokyo Disney Resort. Your voyage to a time when pirates and privateers ruled the seas offers special thrills with cannonballs flying across your boat and other pirate experiences.

Yearning to set sail with Disney’s dastardly buccaneers once again? Our friends at Academy Travel are ready to help you hoist anchor and chart a course for your next Disney vacation!

Which Pirates of the Caribbean attraction is your favorite? Let us know in the comments!

Comments Off on #DisneyMagicMoments: ‘Talk Like a Pirate Day’ on Pirates of the Caribbean