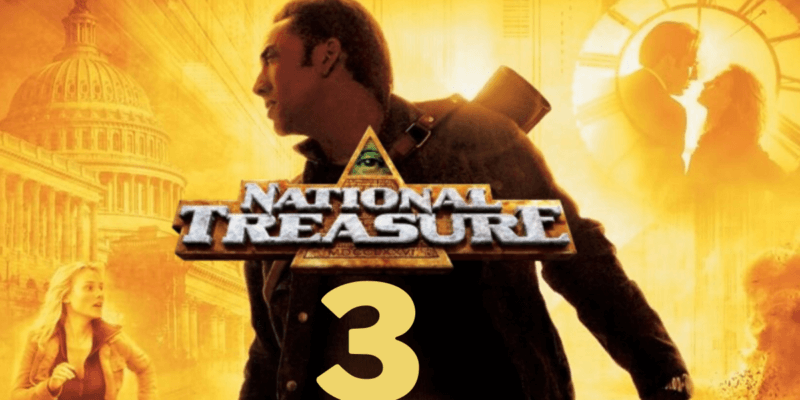 As you probably know, a third National Treasure movie has finally been green-lit, along with a new Disney+ series based on the franchise. But why has it taken thirteen years for Disney to green-light a National Treasure 3 release?

Well, if you believe National Treasure: Book of Secrets Production Executive Jason Reed, Disney theme parks may have played a big part in stalling its release.

Related: Parents are Refusing to Show These 10 Disney Movies to Their Kids

Merchandising and Disney Parks to blame for no National Treasure 3

Per a CinemaBlend article, Reed, ‘tried his damnedest’ to get the third film off the ground as soon as the 2007 sequel’s box office performance was revealed. National Treasure: Book of Secrets didn’t exactly crush it critically (it currently holds a 36% approval rating on Rotten Tomatoes), but it did make a very respectable $459.2 million.

So, it may come as a bit of a surprise that Disney executives weren’t keen on a third sequel starring Nicolas Cage. In an interview with Collider, Reed explained that despite its box office performance, Disney was hesitant about a National Treasure 3 release as it didn’t feel the project had that ‘franchisable’ quality to it. As Reed says;

‘They never figured out a way to integrate it into the parks. It never caught on, even though there were a lot of consumer products, it never caught on as an independent franchise. That makes the numbers look different. It makes it harder to make a company like Disney focus resources on something when they can go make Toy Story or buy a cruise ship. And if the company itself had been really excited about moving forward with it and thought they could blow it out, we would have found a way to make the deal.’

It’s true that National Treasure doesn’t have the same widespread appeal as say Star Wars, The Marvel Cinematic Universe, or Pirates of the Caribbean. However, it’s still odd that Disney wasn’t keen to continue the adventures of Ben Gates for a couple of reasons.

National Treasure as a franchise

It’s quite baffling that Reed mentions that National Treasure couldn’t be integrated into the parks. Indiana Jones and Pirates of the Caribbean (obviously) have a huge presence across multiple Walt Disney theme parks, and both franchises are quite similar in terms of tone and iconography to National Treasure.

Surely if Disney committed to National Treasure as a franchise in the same way as Star Wars and Pirates, we could’ve seen some props, characters, or even music from those films in areas like these? Even if this was impossible, the movies definitely lend themselves to some amazing ride possibilities. A National Treasure themed roller coaster would be wild!

Many National Treasure fans consider the series the spiritual successor to the Indiana Jones franchise alongside the Tomb Raider movies. Despite Disney’s reluctance to establish it as a franchise the films took off and garnered a respectable cult following and an above average box office taking.

Both movies are the product of superstar producer Jerry Bruckheimer who is notable for overseeing of the Pirates and Bad Boys franchises. The films are also in many ways indicative of the period in which they were made. Since then, the rise of Netflix and the many corporate purchases have redefined the Hollywood landscape and the criteria for what makes great films. Marvel comics and Star Wars have certainly cornered the market on blockbusters so hopefully the National Treasure franchise can return and add a little variety into the mix!

The upcoming Disney+ series will hopefully further expand the franchise’s credibility and show Disney that it’s here to stay. Both existing movies are currently available on the streaming service. The films feature an all star cast including Nicolas Cage, Sean Bean, Diane Kruger, Harvey Keitel, and Justin Bartha.

The future of National Treasure 3

As we know, ‘all’s well that ends well’ with National Treasure 3. The film will see the light of day after the runaway success of Producer Jerry Bruckheimer’s Bad Boys For Life. Bruckheimer and Disney famously partnered up to make the ultra popular Pirates of the Caribbean series, though tensions allegedly rose after Bruckheimer produced a series of commercial duds, most catastrophically; 2013’s The Lone Ranger. Seemingly things have been patched up between the studio and producer with the National Treasure 3 release announcement.

But all of this does make you wonder; which other movies aren’t given the chance to become franchises? Regardless, we can’t wait to see Nic Cage back as treasure hunter Ben Gates. Hopefully this time, Disney will recognise the film as a worthy IP and start using it in the parks.

What do you think? Does National Treasure have potential to become a franchise? Let us know in the comments below.