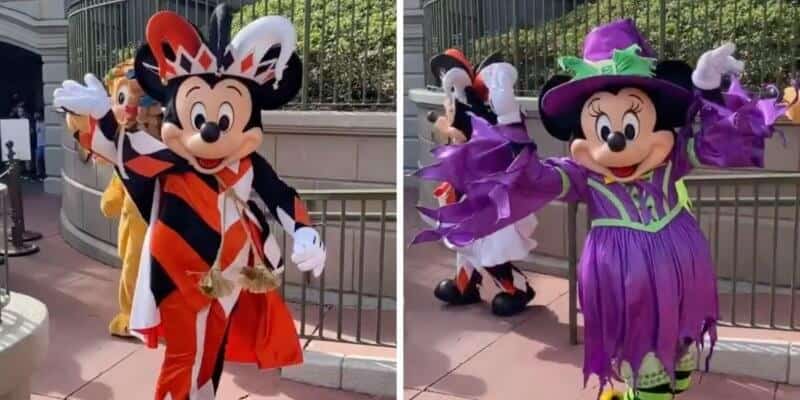 Halloween season officially began at Walt Disney World on September 15. Although things will look a bit different this spooky season with the cancellation of Mickey’s Not-So-Scary Halloween Party, Magic Kingdom is still bringing the fall fun with their Halloween décor, new Halloween cavalcades (including a Villains cavalcade and a Jack Skellington cavalcade), as well as allowing adults to wear costumes throughout normal park hours!

Related: When You Can See Each Halloween Cavalcade at Magic Kingdom

Mickey, Minnie, Donald, Daisy Pluto, and other Disney friends also began greeting Guests on Main Street U.S.A. in some of their Halloween costumes. Before today, Mickey was seen as a vampire while Minnie was dressed up as a butterfly.

You can see these new costumes in the Instagram video below:

We also recently reported that the iconic and beloved Main Street Quartet, the Dapper Dans, have officially returned to the Magic Kingdom at Walt Disney World Resort — as the Cadaver Dans! They are bringing ghoulish fun to Guests visiting the Disney Park. Read more about this here.

But that’s not all because Magic Kingdom is bringing some of the iconic food offerings from Mickey’s Not-So-Scary Halloween Party to the theme parks during normal park hours, including Hades Nachos, Halloween Cinnamon Rolls, and more! Read more about this here.

Are you excited to see Mickey and Minnie change into new Halloween costumes at Magic Kingdom? Let us know in the comments.

Comments Off on Mickey and Minnie Debut Different Halloween Costumes at Magic Kingdom!