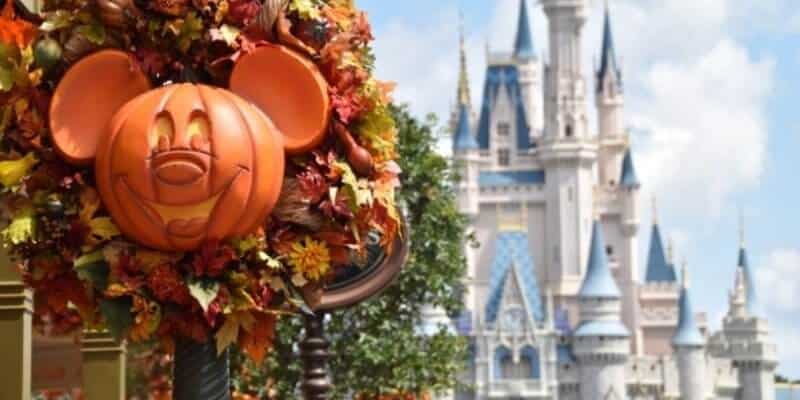 With Disney parks welcoming guests back after months of social isolation, it is a heartwarming sensation to see happy guests returning to the parks. Yet, things aren’t exactly as they used to be. Disney World announced that this year they would be canceling one of their biggest yearly festivities, and the hype of the Halloween season, Mickey’s Not-So-Scary Halloween Party.

Related: Why Did Disney World Cancel This Year’s Halloween Party?

It came as a shock to a lot of people, specially the horror and everything spooky fanatics. However, Walt Disney World parks in Orlando will still be decorating for Halloween despite not having their special event.  So, grab your brooms and pointy hats and celebrate the fact that the Halloween atmosphere will still linger around this fall at Disney.

This is also exciting news for the pumpkin spice fall lovers! Magic Kingdom said they would begin putting its fall decorations up on Tuesday, September 15th, but we spotted some early decor one day early!

If you are a fan of the pumpkin spice season, you will love to see the fall version of Magic Kingdom‘s Main Street!

Related: Spice Up Your Fall with This Pumpkin Spice Milkshake at Walt Disney World

If you haven’t gotten the chance to celebrate with Mickey and Minnie at Disney Parks during the fall, surrounded by fall and Halloween decorations, don’t you worry — Here we bring you some pictures of the fall decoration at Disney Magic Kingdom park shared on social media!

During the fall, Magic Kingdom brings this Halloween spooky vibe to the park at night by using some different purple and orange light tones, adding some Mickey Jack-O’-Lanterns and scarecrows. In order to compensate for the cancelation of Mickey’s Not-So-Scary Halloween Party, Magic Kingdom will be hosting Halloween Cavalcade!

To top it all off, Disney will also be allowing adult guests to wear halloween costumes during some days at the park. These new features will definitely add to the halloween atmosphere around Magic Kingdom.

Fall is creeping into Magic?✨

But, that doesn’t rob the beauty that the fall decor brings during the day with pumpkin and foliage decoration, full fall colors like orange, red and brown tones that are too characteristics of the season!

It wouldn’t be Halloween at Magic Kingdom without Mickey Pumpkins — They’re back for the 2020 fall season. Check out the photos below.

There have also been reports of Cast Members wearing the Mickey’s Not-So-Scary Halloween Party costumes to bring some spooky-ness to normal park hours!

What do you think of this year’s Magic Kingdom Fall and Halloween decor? Which is your favorite season to be at Disney Parks? And which Disney park is your favorite to go to during the fall? Let us know in the comments bellow.

Comments Off on Photos: Disney World Officially Decorated For Fall And Halloween