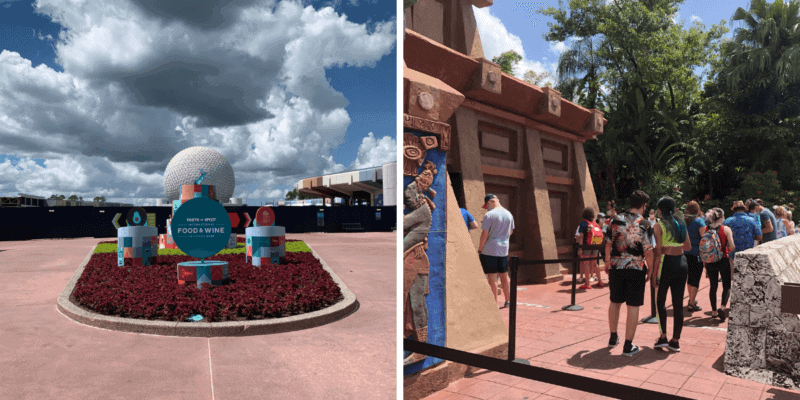 September 5, 2020, will be remembered as the first day that all four theme parks of the Walt Disney World Resort were at capacity since the reopended in mid-July. Disney Park Pass reservations for Magic Kingdom, EPCOT, Disney’s Animal Kingdom, and Disney’s Hollywood Studios were completely booked by Walt Disney World Annual Passholders, Disney Resort Guests and theme park ticket holders.

While it is Labor Day weekend, and crowds have been expected earlier in the week, the biggest surprise, arguably, has been the turn out at EPCOT. While it has been hosting the Taste of EPCOT International Food and Wine Festival, Disney World’s second-oldest theme park has been the least popular according to the Disney Park Pass Availability calendar. That is not the case today.

Today, the large Labor Day crowds have descended upon the Experimental Prototype Community of Tomorrow. According to @ThrillData, it has the biggest positive change from normal so far today!

The #DisneyWorld parks today. #EPCOT with the biggest departure from normal so far. pic.twitter.com/g8eSnqeNGQ

Proof of this can be found in the wait times.

Queue for Frozen Ever After Starts in China

Frozen Ever After has held a wait time of over 60 minutes all day. While that would appear to be a moderate time compared pre-pandemic numbers, the new social distancing guidelines that limit the number of Guests per boat and require Guests stay six feet apart result in extraordinarily long lines.

As shown above the socially-distanced queue for Frozen Ever After was seen pushed all the way back to Norway’s neighbor pavilion, China. Blue tape has been added to the extend the line markers.

The entrance to Mexico is another sight to see. Already one of the most popular pavilions in EPCOT’s World Showcase in part to the combination of its proximity to the entrance and its tequila bar, La Cava del Tequila, Guests have been spotted literally lining out the door to get inside the mesoamerican pyramid.

Like the situation at Frozen Ever After, because of the limited capacity allowed inside the pavilion and the requirement to keep Guests six feet apart, the queue was spotted running outside of the building, wrapping around the to where Donald Duck’s character meet and greet is usually found.

EPCOT is a big theme park, around twice the size of the Magic Kingdom, and its popular pavilions, like Mexico and Norway, have been known to cause the general crowd to buildup in certain areas with others getting far less attention. But today, as the park supposedly reaches capacity, we are hearing that there are no such dead spots and the crowds have been pretty evenly dispersed, at least so far.

But from these pictures and from our sources in the park, it appears that there is still plenty of space throughout the thoroughfare. While lines for certain attractions are building up, limited capacity, though completely booked, still does not come close to the extreme congestion found at EPCOT’s past Food and Wine Festivals.

Are you going to visit Epcot soon? What do you think about the crowds? Let us know.