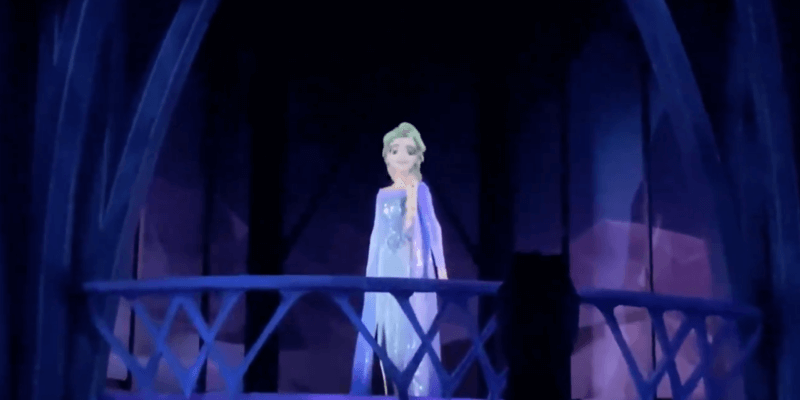 Another day, another Disney World animatronic malfunction. Today’s glitch happened on Frozen Ever After in EPCOT.

As the boats make its way through to Elsa’s ice palace, Guests are supposed to be greeted with the beautiful snow queen belting out “Let it go” from a balcony before their boat is sent backward.

Except, this time, it appears Elsa did not want to sing. All these Guests saw was Elsa smiling and silent while the background music and the rest of the ride continued as normal.

Even Elsa is tired of singing Let it Go. I’m dying over the hand gesture ???? pic.twitter.com/zkS8j4qbYE

Fans watching the video on Twitter took the moment to crack a few jokes.

@OneGoldenSun replied, “the hand dismissively ushering you back is cracking me up!”

The hand dismissively ushering you back is cracking me up

@AtCresentLake responds with a gif of Frozen star Kristen Bell.

@miladyofdisney asked the blunt question, “is she swiping left?”

Is she swiping left?

This is only the latest issue Walt Disney World has faced recently with its animatronics. Recently at EPCOT, the Jose Carioca animatronic in the Mexico pavilion’s Grand Fiesta Tour Starring the Three Caballeros attraction fell down during operations and disappeared for a few days.

At Disney’s Animal Kingdom, the Shaman Woman animatronic in Pandora’s Navi’i River Journey, lovingly referred to as Big Toe, was removed completely and replaced with a video screen. And over in Magic Kingdom Park, glitching animatronics have been reported on Disney’s Pirates of the Caribbean and Under the Sea — Journey of the Little Mermaid. Not to mention the malfunctions that have occurred in Walt Disney’s Carousel of Progress.

Situated in the Norway pavilion of EPCOT’s World Showcase, the Walt Disney World Website describes Frozen Ever After as the following:

Tell us your thoughts about the malfunctioning Elsa animatronic in the comments.