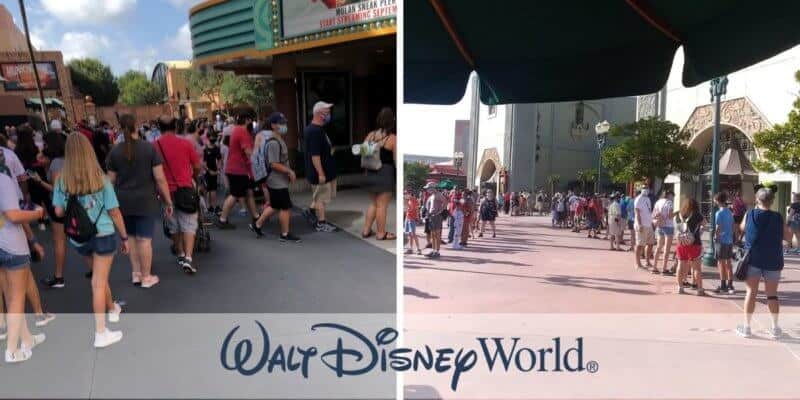 It’s no surprise we knew Labor Day weekend would be a busier time for Walt Disney World. Park pass reservations filled up very quickly and we even recently reported that we anticipated Disney World to be busier than Universal Orlando this holiday weekend.

Today technically starts the beginning of Labor Day weekend and we are already seeing higher wait times than the past few weeks and queue lines decently long (socially distanced, of course).

Magic Kingdom opened its gates at 9am and as of 9:43am, Magic Kingdom had some long wait times, the longest being Seven Dwarfs Mine Train at 50 minutes. Closely behind is both Splash Mountain and Jungle Cruise at 40 minute wait times.

Yesterday, we shared the Madame Leota sipper made its debut early and today the line is incredibly long!

And 10 minutes after park opening, the wait time went up to 90 minutes.

Crowds are high this morning at park opening. Disney’s Hollywood Studios on a holiday weekend is busier than normal.

Another Twitter user shared that Disney’s Hollywood Studios and Rise of the Resistance are off to a fast start this Labor Day Weekend.

#HollywoodStudios and Rise of the Resistance off to a fast start this #LaborDayWeekend. Rise processed its second most groups since reopening yesterday at 107 pic.twitter.com/Po6SiERd25

And you can clearly see the crowds in the photo below.

EPCOT doesn’t open up to the public until 11am, but we expect wait times to be similar to the other theme parks– Especially since the International Food and Wine Festival is going on and that tends to draw huge crowds alone.

Do you have plans to visit Disney World on this Labor Day Weekend? Or do you have a future Disney World vacation booked? Let us know in the comments below!