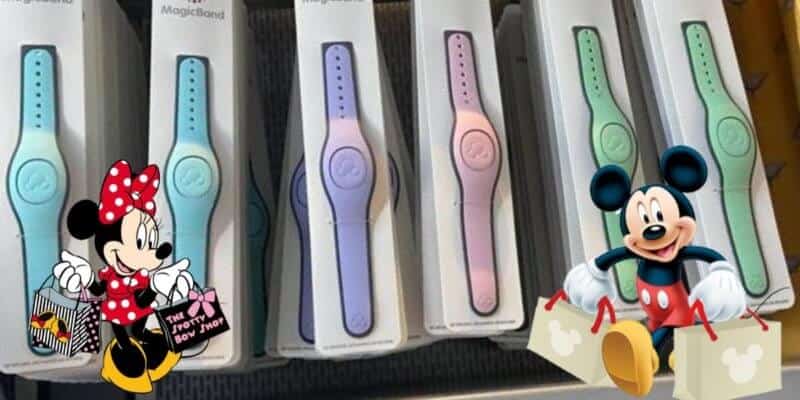 After months of prepping and implementing new health and safety protocols to keep their guests and Cast Members safe, Disney World is now gearing up as they are eager to welcome back their guests beginning on July 11 at Magic Kingdom and Disney’s Animal Kingdom and on July 15 at EPCOT and Disney’s Hollywood Studios.

Prior to the official reopening to the general public, Walt Disney World Resort is giving a special preview to its most valued guests — Disney World Annual Passholders, which Inside the Magic had the opportunity to go and visit everything new at Disney World.

From safety protocols to a makeover of Cinderella Castle to new character experiences — Walt Disney World had so many new things to see and do. But that’s not all because Disney also debuted some brand new merchandise!

Spotted over at the Space Mountain gift shop in Magic Kingdom are these amazing new pastel colored MagicBands. In case you aren’t familiarized, Disney MagicBands are described as:

Enjoy more of your vacation with a MagicBand wristband or touch to enter admission card! Seamlessly connect to your reservations, park admission and other plans and purchases.

MagicBands are a must-have for all Disney World guests as it serves as their “key to the world”. MagicBands hold guests hotel room key, theme park tickets, dining plan credits, PhotoPass, FastPass+ selections, and more all linked to your My Disney Experience account. They also come in several different designs and colors, some of which showcase your favorite Disney character or theme park ride.

Inside the Magic saw a total of four pastel colored MagicBands including blue, purple, pink, and green over at the Space Mountain gift shop — Each practically perfect in their own way.

Keep in mind if you plan on visiting Walt Disney World Resort, there have been a lot of protocols put into place to keep the guests and cast members safe. These include social distancing measures, excessive cleanliness, encouragement of mobile orders, plexiglass, the elimination of character meet and greets, parades and fireworks, and more.

There are also changes to the FastPass+ system and the PhotoPass System along with changes for previously bought tickets including refunds and exchanges.

Which one of these pastel colored MagicBands is your favorite? Let us know in the comments.