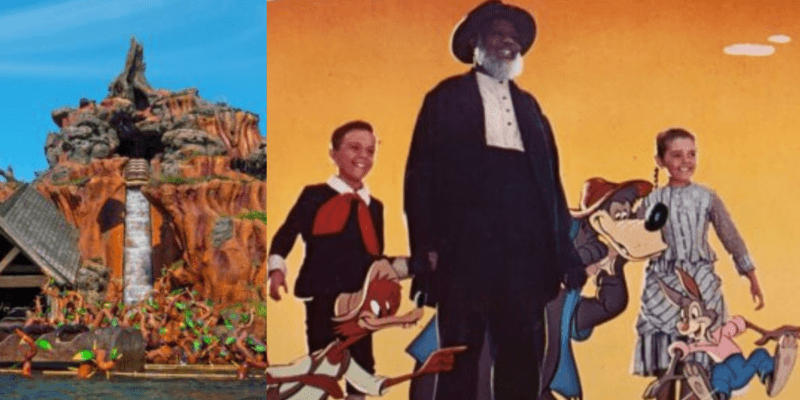 Disney’s film Song of the South has been denounced as a work of racism, and people are now in favor of attraction, Splash Mountain, being completely rethemed. But seriously, why? Yes, there are racist elements in the movie–as all period pieces have–but there is so much more than that.

In my opinion, there is such outrage right now being directed toward a classic Disney film and an iconic Disney attraction, that I think it is prudent we take a minute, talk about it, and hopefully learn about it for ourselves. We are told this movie is racist–and from our 2020 perspective, there is little doubt of that–but I believe we must look at Song of the South in the time it was filmed and Splash Mountain at the time it was created.

Please let me be clear, I am not writing this OpEd against the retheme of Chik-a-pin hill now underway. I am actually very excited to see how Disney Imagineers incorporate The Princess and the Frog. What I am writing against is the way in which Splash Mountain has become a victim of cancel culture. I believe we cannot judge storytellers in the 1940s or the 1980s by 2020 standards nor can–or should–we say Disney was maliciously racist for theming an entire attraction after the film.

I argue that Splash Mountain at least attempted to redeem Song of the South, and  the ride should be remembered as allowing the lovable yet mischievous Br’er Rabbit to still find his place among the other Disney characters.

I’d also argue that none of the content–be it the original Uncle Remus stories, Disney’s Song of the South film, or Splash Mountain–was ever meant to be maliciously racist. But to understand how they weren’t, we need to look at these stories from the perspective of the world in which all of this was created.

Song of the South was based on a series of children’s stories compiled by journalist and racial reconciliation activist writer  Joel Chandler Harris. Many believe that his intention when he created the collection was to “preserve in permanent shape those curious mementos of a period that will no doubt be sadly misrepresented by historians of the future.”

Yes, they were originally slave stories that Harris compiled into a collection. But they prove to be universal in their morals, and I think kids of all races and backgrounds can learn from them. Many believe that Harris was attempting to use these stories and new-found empathy to break down racial barriers during the Reconstruction period in which he first published them.

Background on Song of the South

Song of the South tried to encapsulate that universality. In the movie, Uncle Remus tells little Johnny the stories about Br’er Rabbit to help him through his troubles (parents getting a divorce, leaving the city for a place in the country, and bullies). Through his mischievous protagonist, Br’er Rabbit, Uncle Remus spins yarns that Johnny uses to get out of trouble, outsmart his enemies, and find his own Laughin’ Place: a safe place of escape from all the troubles and imperfections of the real world.

Now, this movie takes place in Georgia during the Reconstruction Era. That alone creates settings and race dynamics that make many people in 2020 boil over. Then add on top of it the extremely politically incorrect language such as the “Tar Baby” scene and the over-exaggerated cartoon-y portrayal of African Americans in the form of Br’er Rabbit, Br’er Fox, and Br’er Bear created by African American actors Nick Stewart (Br’er Bear), Johnny Lee (Br’er Rabbit). James Baskett (Br’er Fox). Baskett also played Uncle Remus, and it didn’t help the fact that he could not attend the premiere in Atlanta due to segregation at the time.

There is also a point when Uncle Remus says “a long time ago…every day was mighty satisfactual…If you’ll excuse me for saying so…’twas better all around.” This has been interpreted as him basically saying everything was better when there was slavery. But Uncle Remus was a storyteller. I believe he is trying to empathize with his audience, Johnny, whose simple childhood innocence truly believes that everything was satisfactual in the past.

In the 1940s, people were not as “woke” as they are today. They could tolerate what is now seen as the racist tropes of the film to acquire the simpler, higher-level message of the movie.

Read More: Everything You Need to Know About ‘Song of the South’

Now let’s fast-forward to the end of the 1980s. At this point, Song of the South was very much seen as Disney’s most controversial film. In fact, it was never released on video in America. But when Disney set out to create Splash Mountain, the story of Br’er Fox, Br’er Bear, and Br’er Rabbit had a chance for a new life.

Disney’s solution was to remove all live-action aspects of the movie and bring Guests directly into the animated world of the Uncle Remus stories without them knowing it is an Uncle Remus story. With, original context almost completely removed, we are reintroduced to Br’er Rabbit, Br’er Fox, and Br’er Bear and their friends as just simple cartoon-y southern country folk.

Br’er Rabbit gets the urge to pack up and go off on an adventure. But his search for greener pastures and his Laughin’ Place only runs him into trouble, and we end up being thrown down into the briar patch with him. But we all get back home safe.

Splash Mountain also helped immortalize two of the most iconic Disney park songs today: “Everybody Has a Laughing Place,” and “Zip-a-Dee-Doo-Dah.” Theses are songs that send the message that no matter how bad things get, you can always go to your laughing place, and every day can be a Zip-a-dee-doo-dah day.

That is I believe what the attraction deserves to be remembered for: making an attempt to not just forget about Song of the South or rewrite the narrative, but to redeem the story and characters for a modern audience so far removed from the source material. And 30 years ago, it appears people were more accepting of that chance of redemption.

Replacing Song of the South with Princess and the Frog

I am not against changing the rides in the Disney theme parks if they are done for the right reasons. Innovation is good! Giving Princess Tiana and her friends more than just a riverboat ride and a restaurant is a great idea! I can absolutely imagine us “going down the bayou” on a log (even though that bayou is basically below sea level and there are no mountains in southern Louisiana like there are in northern Georgia). But not if it means just painting over something a vocal group of us are ashamed of.

We have to look at Splash Mountain and its source material from the time they were created and remember their perspective and messages despite all politically incorrect imperfections. Hindsight is always 20/20. While we should look to the past to identify things we never want to do again, we should never negate good-natured people and work in the past for their imperfections.

I am not denying the problems many of us see today. I am simply saying that I believe they tried their best, they didn’t know any better, and for the standards of their day, they did their job. Disney’s message reached their audiences at the time. Story still constantly develops and evolves over time to reach its constantly evolving audience.

It is now time to retire the story. But I hope that Disney fans everywhere never forget that “Everybody has a Laughin’ Place” and that every day is a “Zip-a-dee-doo-dah” day.