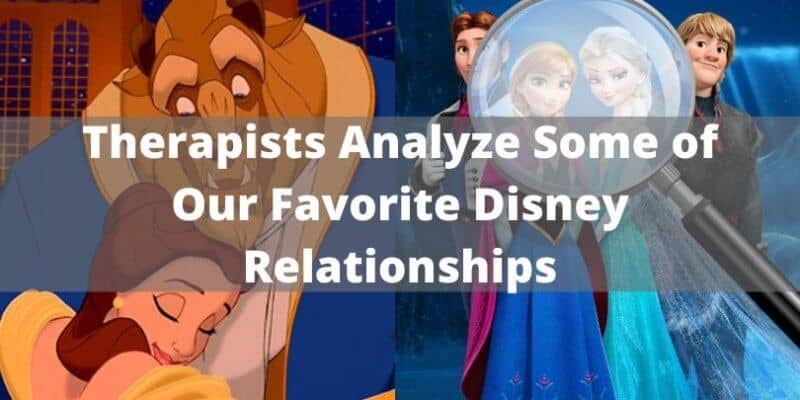 At some point, we all may have read an article, heard people commenting, watched a video, or even caught yourself analyzing some of your favorite Disney movies. And things can get dark pretty fast.

For example, the polemic discussion of consent in Sleeping Beauty, the age of Snow White, or even the rumors of stockholm syndrome in Beauty and the Beast. The list goes on and on. But, not all of the theories are as as dark as we might let our wandering minds too think!

Well VanityFair called two relationship therapists and co-hosts of Marriage Therapy Radio, Laura Heck and Zach Brittle, to analyze the relationships in five Disney stories: Frozen, Snow White and the Seven Dwarfs, The Little Mermaid, Beauty and the Beast and The Incredibles. And their professional opinions on some of our favorite movies might just surprise you!

Below, we have broken down what the therapists said about the character’s relationships.

We all know the tale of the two royal orphan sisters — one with magical ice powers and the other without — that embark in this crazy journey to save their kingdom. But Laura Heck and Zach Brittle recognize that the lessons from Frozen tries to show us actually run deeper than a fairytale adventure story.

Heck and Brittle start discussing the “love story” between Anna and Hans and they agree that, for Anna, everything might seem new, exciting and magical, after all, she just met the “perfect” guy. Too good to be true?  In Anna’s case, yes — Hans was way too perfect to be true.

But why does Anna blindly falls for a guy she just met? Well, the therapists first start by analyzing the two personalities in play; Hans as a calculating mischievous man and Anna as a “fumbling and awkward” character who melts your heart right away.

Anna’s bubbly personality is captivating, but it does show her naive side. Through the movie, we can see that Anna spent most of her childhood years alone. Literally talking to pictures on the walls…(hang in there, Joan!) So, she might not have developed some important social interaction cues. This might explain why Anna’s character is so easily drawn to Hans — which provides her the attention she always craved — and willing to marry after a couple of minutes of meeting him. The therapists labeled her behavior as limerence.

“Limerence is field by adrenaline, novelty and not based on any reality,” Brittle says about Anna’s blind act to accept Hans marriage proposal. Heck also comes in and starts discussing the biological explanation for the limerence state Anna falls into stating “Our bodies a literally pushing us towards one another to procreate.”

So far, Anna’s story seems to be changing. The gates have opened and she has found her prince. But here is when Brittle and Heck start discussing Anna and Elsa’s relationship. They label Elsa as “the voice of reason” in the situation, as Elsa disapproves of the engagement since the two love birds just met. Heck says:

I think it’s really important to have those people in you life. Because often times, especially in the first couple of hours of meeting someone and they are interested in you and they are so handsome. It’s so easy to get sucked up into all those hormones.

It is important to have that third party, that person that knows you really well, to be the voice of reason. Cause clearly, your body and your brain are not thinking logically at this point.

Brittle continued with “I think there is something about protecting your own emotional intelligence as you enter relationships and getting the feedback that you need whether that is from your sister, who is kind of a jerk, or from your therapist or from your social orbit.”

Well, the movie goes on, and you know the story. So, let’s jump to the end. The betrayal… The scene where Hans is about to kiss Anna, after she is hurt by Elsa’s magic, but stops and confesses to his plan. “Harsh!” are the first words out of Heck’s mouth in the video when talking about that scene.

Regarding that scene, Heck then makes interesting comparison between Hans and Elsa: their gloves. She goes on explaining how Hans had this mask all along “concealing” how he was, comparing Hans concealing his true intention with Else concealing her powers.

Elsa uses her gloves to prevent herself from using her ice powers and hiding who she is, and yet so does Hans. During the betrayal scene with Anna, Hans reveals his plans to Anna with his gloves off, and before leaving Anna locked in the room, he places the gloves back on. This might be interpreted as placing the mask back on before Hans goes on and tricks the people of Arendelle.

“Everyone that was watching this for the first time we were feeling this betrayal as in a pretty significant way. Mostly because in a way, Disney betrayed us. They did this for entertainment, but it was perfect, it was the perfect moment,” says Brittle.

Brittle even goes on and refers to the works of a scientist to bridge the parallel between Frozen and relationships in real life. “Every relationship that is struggling, one hundred percent of them, are struggling because of betrayal,” he says.

After all of the analyzing, the two therapists agree that Anna progresses through the story and starts understanding the value of relationships, and what reflects a good relationship as she falls for Kristoff. They also conclude by putting it out there that the true love story in the movie is actually between Elsa and Anna.

So, Frozen is after all a love story; a story of estranged sisters learning to love each other.

Beauty and the Beast: Belle and The Beast

Right away, Beck and Brittle recognize Beauty and the Beast as a story of evolution. In this case, they are referring to how a person can evolve, or change, in a relationship by letting your guard down and allowing the other person [Belle] see who you truly are — see the man behind the Beast.

But they point out that the change, or evolution, in this story has to come from the Beast. “I actually like that idea, it’s within his [the Beast] control,” says Heck. “In order for him to change [back to human], he has to focus on himself and focus on loving another person.”

Related: Live-Action “Beauty and the Beast” Prequel Series About Gaston and LeFou Coming to Disney+

The movie explores the idea that love can change someone, but the therapists acknowledge that love is earned and learned. So, love by itself might be a trigger for someone to change, but the will to change is only up to them.

“Its not a story of “this kiss will cure you” its more like… learning to love another will cure you. Will cure him in this case,” Brittle explained.

But, do the therapists mention the widespread idea of Beauty and the Beast being a movie about Stockholm syndrome? Actually the answer is yes! However, do they agree with that idea? No.

Heck and Brittle do not believe that Belle and the Beast’s can be characterized, and Belle’s love for the Beast, as Stockholm syndrome. “This movie usually gets compared to stories of Stockholm syndrome, were people fall in love with their jailor. But that is not what’s happening here. She [Belle] is defiantly making her own choices, and it’s not because she is being manipulated,” says Brittle.

Related: Alan Menken Will Write Music for “Beauty and the Beast” Prequel on Disney+

Beauty and the Beast is a story about the power of love, and how love can affect the relationship between two people. And, as Brittle said, “love is transformative.”

If you would like to see the video and hear what the therapists have to say about Snow White and the Seven Dwarfs, The Little Mermaid and The Incredibles, click here.

So, do you agree with what Heck and Brittle had to say about the characters in Frozen and Beauty and the Beast? Let us know in the comments bellow.