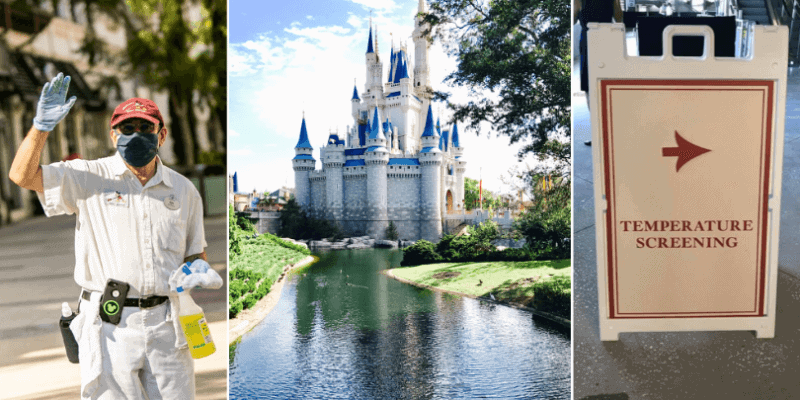 Disney announced today that they will be making an official announcement of the reopening plans of Walt Disney World Resort tomorrow, May 27. And early this evening, it was revealed that a health inspection team visited the theme parks in order to make sure they are compliant with CDC guidelines.

“In preparation, an Orange County inspection team visited Sea World and Walt Disney [World] today to determine if they were in compliance with those recommended guidelines by the CDC and the governor’s executive order, etc. The inspection team was made up of two representatives of the Florida Department of Health in Orange County, the county’s EMS medical director, the county building official, and the Director of the county’s Planning, Environmental, and Development Services. I look forward to receiving the feedback from the inspection team based upon what they observed today.”

Dr. Raul Pino, Health Officer for the Florida Department of Public Health in Orange County, shared that his team was “very happy” with what they saw at the theme parks today.

Pino shared today that every time a guest rides an attraction, he recommends that they consider that the person who rode the attraction before them may have contaminated it. And every time a guest leaves an attraction, they should consider that they contaminated it, too. He recommended that theme parks implement protocols such as wearing masks, frequent hand washing, and trying to move foot traffic in one direction (which he admitted is difficult in the parks).

“But the parks, in general, all the attractions have been very good about [listening] to the recommendations that we have offered,” he said.

Pino continued, “What we are trying to do in all these attractions, in all the parks and activities, is, How can we engage safely? And that has been the message from the mayor from the beginning. How can we do this safely?”

Mayor Demings also shared a bit more information about what we can expect in terms of the theme park reopening plans that will be presented tomorrow morning. He stated that although he has seen drafts of Walt Disney World’s reopening plans (which includes guest and Cast Member safety protocol) the final versions will be presented tomorrow morning.

“We do not expect to see the theme parks’ final presentations until they come before the task force tomorrow morning… If the task force approves the plans — recommends approval of the plans — I will write a letter of endorsement to Governor DeSantis similar to what I did last week for Universal Orlando and the 12 smaller attractions which opened up this past weekend.”

It was also announced today that the Florida Department of Health will have “secret shoppers” walking around the Universal Orlando Resort theme parks to monitor whether guests are complying with health and safety protocol. It has not yet been revealed whether a similar team will be present at Disney World. You can read more about that here.

We will update Inside the Magic as soon as we know more information about Disney World’s reopening plans for Magic Kingdom, EPCOT, Disney’s Hollywood Studios, and Disney’s Animal Kingdom theme parks, as well as Blizzard Beach and Typhoon Lagoon water parks and the Disney Resort hotels. The official reopening plan will be presented to Orange County tomorrow, and it will hopefully be followed by the official announcement from Walt Disney World Resort.

Disney World has been closed temporarily since mid-March.