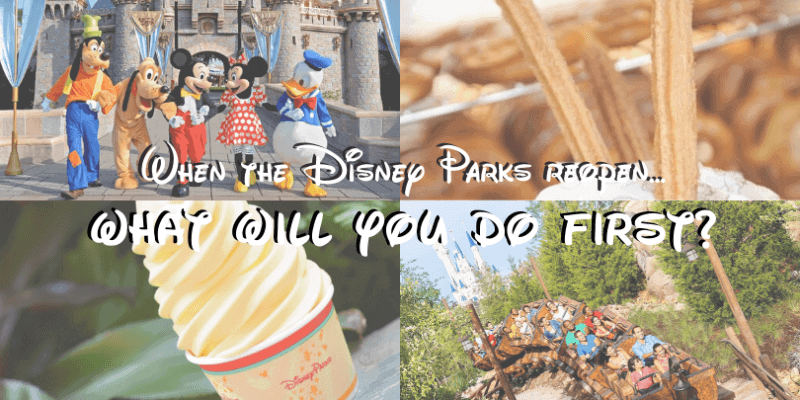 What will you do when the Disney Parks reopen? Many of us have our list of Disney theme park must-dos. But the first time you visit Disneyland, Walt Disney World, or any other Disney Park around the world, what will be the very first thing you do?

Will you eat a Dole Whip or churro? Ride Big Thunder Mountain Railroad or Seven Dwarfs Mine Train? Sit on a bench on Main Street, Pixar Pier, or the World Showcase?

We asked Inside the Magic readers what they will do first once they can return to the Disney Parks after they have been closed for so long. Here’s what they had to say!

Inside the Magic readers, we want to hear from YOU!

After the Disney Parks reopen and you finally get to visit Disneyland, Walt Disney World, or any of the parks worldwide, what will you do FIRST?

Inside the Magic readers, we want to hear from YOU! After the Disney Parks reopen and you finally get to visit…

When it comes to where Disney fans want to be first, one of the most popular answers was Main Street in the Magic Kingdom or Disneyland:

“Take in Main Street and the Castle and hope to get reservations at Crystal Palace!”

“I’d stand on Main Street and taking it all in. The sounds the smells the atmosphere. Then I’d get a Minnie strawberry bar and walk to the Tea Cups.”

“Grab a coffee and sit on Main Street in the MK and take it all in.”

“Stroll slowly down Main Street until I get to the Castle. Crying every step of the way. The same as I do every time I get to go.”

Of course, there’s some variation when it comes to what Inside the Magic readers want to do when the parks reopen. Many said they plan to get on Star Wars: Rise of the Resistance at Star Wars: Galaxy’s Edge as soon as they can. Others shared they’d rather head straight to EPCOT and stroll around the World Showcase. Many shared a snack they’d eat (like a churro, Dole Whip, or Mickey ice cream sandwich), or even a particular attraction they miss so much (like Haunted Mansion, the Mad Tea Party, Splash Mountain, Space Mountain, .

If it wasn’t clear before, it’s clear to see now that Disney fans want the parks to reopen. But when should the Disney Parks reopen? Now that’s a different question.

Our Inside the Magic team also wanted to share some of our must-dos and the first things each of us plan to do as soon as the Disney Parks reopen. Oh boy, do we have some wonderful plans for ourselves once we can be back in our happy place.

Here’s what Inside the Magic writers plan to do at Disneyland Resort and Walt Disney World Resort as soon as we are able to do so. Maybe these will give you ideas for your next vacation!

“Just sit down somewhere in the parks and take in the views and atmosphere.”

“Watch Happily Ever After and cry away all the pain I experienced while the parks were closed.”

“”Ride Pirates of the Caribbean and soak up the ambient music and the smell of the water.””

“Meet Mickey and tell him how much I’ve missed him!”

“Take in the sights, sounds, and smells of EPCOT before sitting down and enjoying a meal at Le Cellier.”

“Check in at the Boardwalk and hear ‘Welcome Home.'”

“Take the monorail over from the TTC to MK and just take a walk around the entire park.”

“Grab a churro and sit on the Disneyland train to take in the sights and see all the happy faces.”

“Starbucks by the castle!”

“Do a lap around World Showcase and watch EPCOT Forever!”

As for me, I plan to grab a tropical Dole Whip from the Tropical Hideaway, some Mickey beignets and a Mint Julep from New Orleans Square, and ride Pirates of the Caribbean. And after, I’ll pick a bench on Main Street, U.S.A., where I’ll sit and soak in the atmosphere I’m missing so much.

When the Disney Parks reopen, what will be the FIRST thing you do? Let us know in the comments!