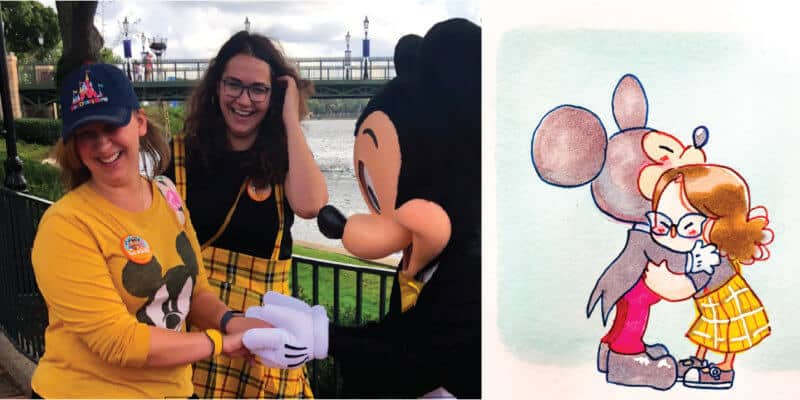 If you’re like me, you grew up vicariously through the stories and photos of your peers’ trips to Disney World or Disneyland. In school, you always heard about kids taking days off to go spend time at Magic Kingdom, hearing about attractions like Space Mountain or Tower of Terror. They showed off the magic of their trips like badges when they returned, in the form of pictures with Mickey Mouse and Cinderella Castle.
Yet, for one reason or another, you never made the trip Disney World to experience it for yourself. The pictures of Main Street USA that you saw on Facebook were the closest you could get. After a while, that magic of experiencing a Disney trip starts to feel like it’s out of your reach.

As someone who’s first trip to Disney was last year at 21 years old, I’m happy to report that the magic of your first Disney experience is timeless.

I had the pleasure of taking a trip to Disney as a guest, later working at Epcot and Magic Kingdom as a Cast Member, and bringing my older sisters as guests for their first Disney experience. Despite being adults with no children, the parks still felt just as magical.

Walt Disney‘s goal was to make the Disney Parks enjoyable for people of all ages.

When my sisters took their trip, they boarded Disney’s Magical Express to Disney’s Art of Animation Resort. At check-in, they were offered a “Magical Upgrade”, and were moved from a standard room to a deluxe suite for free. The resort room was very themed, and the upgrade was the perfect way to start a first Disney visit. Walt Disney World Resort is about making sure that all guests have the best vacation possible, and you really come to appreciate that level of thoroughness as an adult.
Before she could even scan her park hopper ticket into Magic Kingdom, my oldest sister, whose favorite film is Beauty and the Beast, was already in tears from nostalgia as an instrumental version of “Be Our Guest” played at the Train Station. Entering the park, we stumbled across the Main Street Trolley Show as we saw the castle for the first time, and both of my sisters were now in tears. There’s a big element of seeing the castle for the first time and thinking, “I finally made it.”
I quickly showed them the ropes of using the My Disney Experience app for photos, dining reservations, fast passes, and they learned the excitement of getting a FastPass for those one specific attractions you want. One highlight was securing Space Mountain FastPass within the next hour while on The Many Adventures of Winnie the Pooh. I helped them try to find the spot with the best view in Magic Kingdom of Happily Ever After, and had a Disney PhotoPass Cast member finally take their own pictures in front of the castle and with Mickey Mouse.

Even as an adult, all of your favorite Disney characters are still just as excited to finally meet you.

Sure, some things like the Bibbidi Bobbidi Boutique aren’t exactly available to you as an adult (though you can head on over to a Disney Salon for a Disney-inspired Character Couture Package). But there are still many adult-exclusive activities throughout the Disney parks. You can drink around the world at Epcot, get a massage at Disney’s Grand Floridian Resort & Spa, hang out at the dueling piano bar Jellyrolls at Disney’s Boardwalk, or go to a late-night party at Disney Springs.
Overall, my sisters ended their vacation at Disney World with amazing memories. We experienced The Food and Wine Festival at Epcot, relived Star Wars nostalgia at Galaxy’s Edge, and they still talk about how they just so happened to stumble upon Winged Encounters at Disney’s Animal Kingdom.
If you’re questioning if you should take the trip to Disney because you’re worried the magic will be lost on you since you’re an adult now, take it from us: the magic is timeless. Don’t let the stigma of not having kids or not being a kid hold you back from experiencing arguably the greatest theme park in the world. Even if you didn’t meet him when you were a kid, Mickey Mouse will still be ecstatic to finally meet you.

Do you think you’d need help planning out that first Disney trip? Our authorized Disney Vacation Planning Friends at Academy Travel can help! Check it out now for a free no-obligation quote.