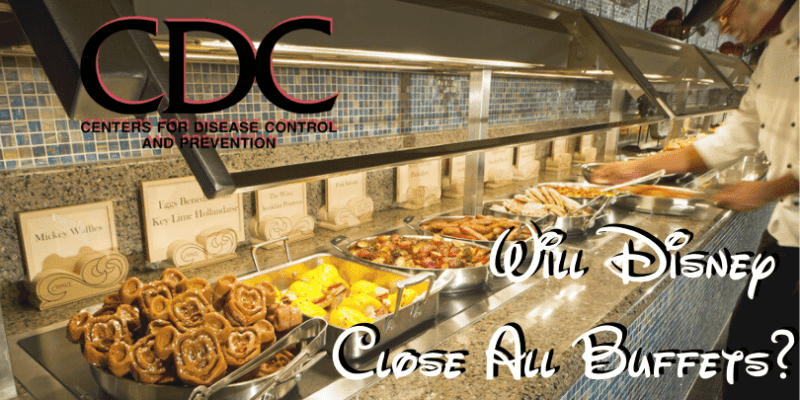 With health and safety regulations currently in place amid the pandemic, many frequent Disney Parks guests and Disney Cruise Line passengers are wondering just how much their favorite vacations will have to be modified in a post-pandemic world. One of the most common Disney vacation must-dos is dining at a buffet. But out of health concerns, will all buffets be cut from Disney Parks, resorts, and cruise ships?

It’s no secret that vacationers love all-you-can-eat buffets, and Disney vacationers are no different.  There are so many buffets at Disneyland Resort in Anaheim, California, Walt Disney World Resort in Orlando, Florida, and aboard all of the Disney Cruise ships (the Disney Magic, Disney Wonder, Disney Dream, and Disney Fantasy).

From character dining at Storytellers Cafe at Disney’s Grand Californian Hotel & Spa to Tusker House Restaurant at Disney’s Animal Kingdom to Cabanas aboard the Disney Cruise ships, Disney buffets can be found at nearly every Disney travel destination. Even restaurants that aren’t listed as buffet-style can still feature buffets in the form of salad bars and toppings bars (such as Pacos Bill Tall Tale Inn & Cafe at Magic Kingdom).

So given the widespread nature of buffets at Disney Parks and on Disney Cruise ships, how could Disney go about eliminating buffets and buffet-style areas in restaurants, should that be a requirement for reopening?

Buffet restaurants like Cabanas aboard Disney Cruise Line could opt to switch to cafeteria-style dining instead of self-serve stations. For example, It was recently revealed that Royal Caribbean may eliminate buffets altogether once cruising resumes, and more than likely that cruise line will turn their buffets into “something more akin to a restaurant.”

“We are working through all of the foodservice options and buffets MAY be presented differently or go away for a while,” a Royal Caribbean spokesperson said. Given Disney’s stake in the tourism industry, it’s likely they will take a similar or even stricter route.

Some buffet restaurant chains — such as Souplantation/Sweet Tomatoes — have even announced that they have closed their doors permanently because of the financial pressures of the pandemic.

And when it comes to the Disney theme parks, popular buffet restaurants will have to be modified, if they are not transformed into more traditional table-service or quick-service dining locations altogether. Even restaurants with salad bars and toppings bars will likely need to eliminate these self-serve stations in order to comply with CDC guidelines. Since Disney has already stated that health and safety are a top priority and that the company continues to work with health officials, it wouldn’t be surprising if all self-serve elements at Disney-owned and operated restaurants were eliminated, at least for the time being.

We highly doubt that your favorite Disney restaurants that happen to be buffets will close for good. It’s more likely that the company will decide to revamp the way food is served at these establishments so that guests can still look forward to eating their favorite dishes (from the bobotie at Boma at Disney’s Animal Kingdom Lodge to the classic Mickey waffles at the Crystal Palace at Magic Kingdom).

We already know that the future of Disney dining is going to look a lot different, with restaurants having strict occupancy limits amid the pandemic. The elimination and modification of buffet-style dining may sound like an adjustment if you always look forward to serving yourself plates upon plates of food while on your magical vacation. But chances are, these locations will still offer “all you care to enjoy” meals…just without the germs.

Disney has not yet revealed the company’s plan for buffet meals at Disneyland Resort, Walt Disney World Resort, and Disney Cruise Line once the theme parks reopen and cruises resume. But as soon as we know more information, we will be sure to update Inside the Magic with the latest news.

For now, continue booking those dining reservations for July 1 or later at Disneyland and Disney World. Just keep in mind that if you book a meal at a buffet-style restaurant, chances are it will come with some modifications.

What do you think of the possible future of buffets at Disney Parks and aboard Disney Cruise ships? Let us know your thoughts in the comments!