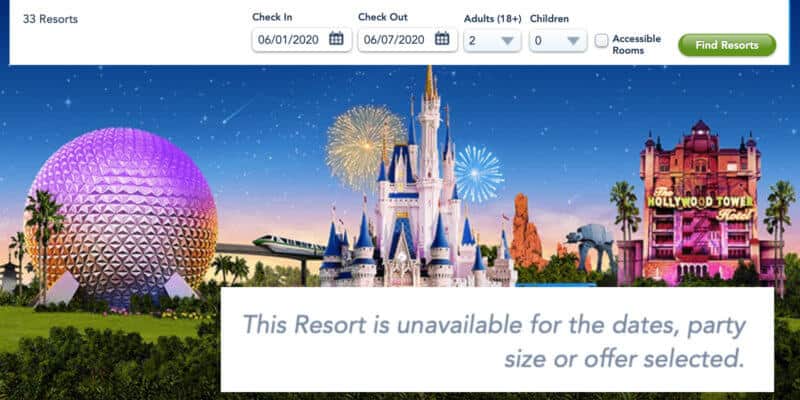 It’s official, as per the official Walt Disney World website, the theme park resort hotels are now only accepting available bookings for stays after July 1. This news comes on the heels 0f Disneyland Resort making the same announcement earlier this week.

From our search, it seems the zero vacancy can be found across all Walt Disney World hotels ranging from Value to Deluxe Villa.

However, starting after July 1, we discovered that all Walt Disney World Resort hotels currently offer available bookings, which can be seen in the screenshots below. From our search, it seems stays are available in hotels ranging from Value to deluxe Villas.

At this time, it’s not known if this lack of availability is on account of the fact that all of the rooms across all of these resorts are booked or because Walt Disney World will not yet be ready to host guests in the month of June.

Friday, it was revealed that Disney was surveying guests about returning to the parks upon their reopening. Within these surveys, it was discovered that Disney was asking guests with June bookings whether they would still want to visit the theme park resort as early as June. From this, it may indicate that June trips to Walt Disney World Resort have not yet been automatically canceled.

Currently, the latest Walt Disney World vacation we’ve seen canceled was for a trip from one of our readers taking place May 29 – June 4.

What are your thoughts on Walt Disney World no longer accepting reservations for rooms prior to July 1? Let us know in the comments!