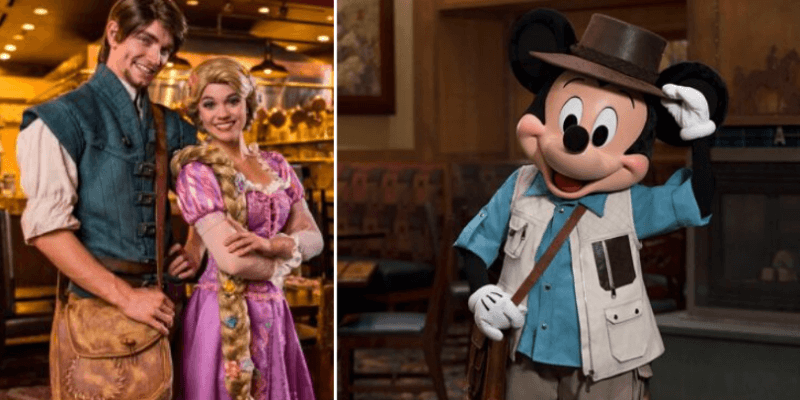 One of the easiest ways to meet characters at the Disney Parks is by booking a character dining reservation. But with social distancing and health and safety measures in place, will Disneyland and Disney World still offer character dining in the future after the parks reopen?

Character dining gives guests the opportunity to meet Disney characters (including the must-sees like the Fab Five, rare characters that don’t often do meet and greets, and all of our favorite Disney Princesses) without having to wait in line. Typically at a character dining meal, Disney characters (both “face characters” like princesses and princesses and “fur characters” like Mickey Mouse and Winnie the Pooh) will walk from table to table greeting guests, taking photos with them, signing autographs, and generally interacting with them.

But when Walt Disney World Resort and Disneyland Resort — both of which offer a variety of character dining options — reopen, will character dining still be offered as it always was, will it be modified to abide by social distancing guidelines, or will it be cut from the Disney dining options altogether? Here is all the information we know so far.

At Disney Parks around the world, we can see examples of how character dining could be modified in the U.S.

Shanghai Disney Resort is currently offering a modified version of character dining. Instead of characters visiting each table, they will simply make an appearance at each meal and wave to guests, who are able to take photos of them at a distance.

Below is the new description of character dining at Lumiere’s Kitchen at the Shanghai Disneyland Hotel:

Starting March 14, Lumière’s Kitchen will offer brunch and dinner during weekends. Guests will be able to enjoy brunch from 11:30-14:00 on Saturday and Sunday as well as dinner on Saturday evenings from 17:30-21:00. Special appearances by popular Disney characters add a touch of star-studded magic. Choose from an array of appetizers, salads, international entrées and of course, a dazzling array of Beauty and the Beast-themed desserts.

When Will Character Dining Resume at Disneyland and Disney World?

Without any news pertaining to Disneyland’s reopening, we don’t yet know if character dining will be offered.

It’s important to keep in mind the point that was raised at the beginning of this article: a huge benefit of character dining is to offer guests the opportunity to meet Disney characters without waiting in a line to do so. However, the examples of modified character dining at Hong Kong Disneyland and Shanghai Disneyland (in which characters will say hello to guests from a distance and will not visit every table for meet and greets) show that this benefit of meeting characters has been essentially taken away.