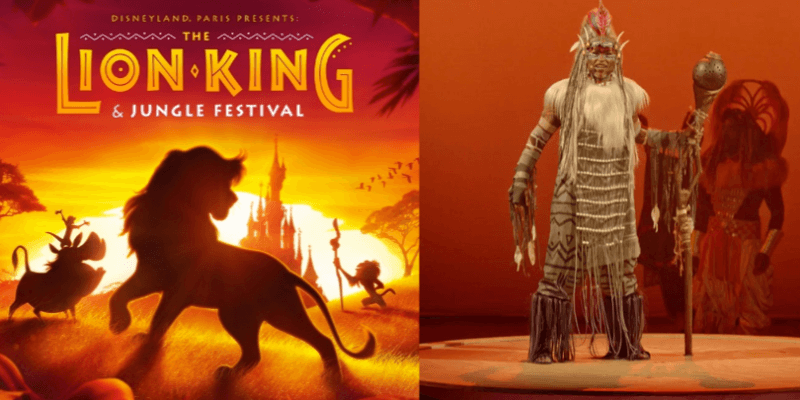 Over the last month, we’ve been getting some Friday surprises from the Disney Parks and Disney Parks Blog.  It started with Walt Disney World streaming their Happily Ever After Fireworks show.  Then Disneyland Paris shared their Illuminations Fireworks show.  For Halfway to Halloween, we got to do a Virtual Viewing of Disney’s Not So Spooky Spectacular.

Watch the entire show below!

The Lion King: Rhythms of the Pride Lands

So get yourselves ready to dance away to the beating drums of Pride Rock anthems!  The Pride Lands show is a part of the summertime The Lion King and Jungle Festival.  We’ll see singers, dancers and acrobats dressed in original costume as famous faces, such as, Rafiki, Simba, Timon, Pumbaa, Nala, Mufasa and Scar.  The show’s renditions and performances will be iconic moments to the film with song in hypnotic rhythm.

This The Lion King: Rhythms of the Pride Lands show happens at Disneyland Paris and is only one of many attractions during the festival that happens throughout Frontierland and Adventureland.  You can make plenty of memories with characters like finding Explorer Mickey and Minnie at The Jungle Book Jive Musical show.  Maybe you’re in the mood for some dancing or watching a parade.  It’s a great place to embark on a colorful voyage through the wild all while never having to leave a theme park and still able to see our favorite Disney character.

This virtual viewing of The Lion King: Rhythms of the Pride Lands is a part of Disney Parks Blog bringing us some Disney magic at home with #DisneyMagicMoments.  We’ve seen some #VoicesatHome from the Dapper Dans like “When You Wish Upon A Star,” “When I See An Elephant Fly,” “Grim Grinning Ghosts,” and “Happy Birthday.”  Baby animals such as a zebra and piglet were recently born at Disney’s Animal Kingdom that is the pure magic of life.  All of these are nothing short of creative, and Walt Disney would approve of all this imagination!

Comments Off on Disney Parks Streams “The Lion King: Rhythm of the Pride Lands” Show Online!