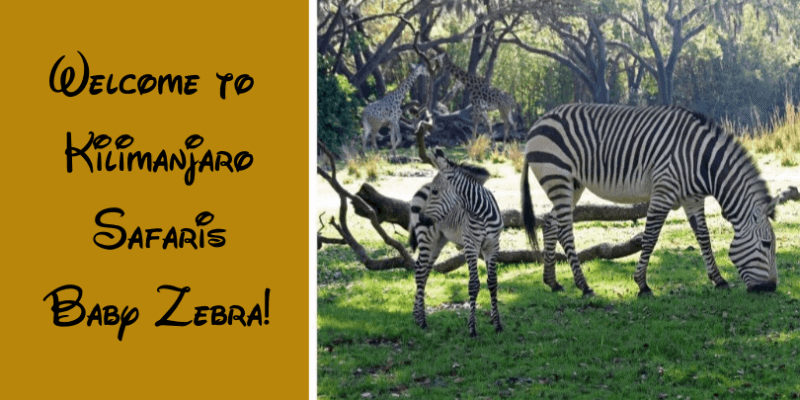 Things are quiet around the world, and everyone is still adjusting to our temporary new normal.  There are still a few things going on as usual, like the Animal Care Team at Walt Disney World providing essential needs to the exotic animals that call Disney’s Animal Kingdom home.  For all you animal lovers out there, you need not worry, they are well taken care of!

Disney has been sharing a bunch of #DisneyMagicMoments on Disney Parks Blog and social media.  Recently they shared the birth announcement of the newest member to the Disney Animal Kingdom family, a baby zebra foal.  Other than knowing this Hartmann’s Mountain Zebra was being well nurtured by her mother, Heidi, we didn’t have too much information on her.

Now a few weeks after the baby zebra’s birth, Disney Parks Blog released a new video today of this zebra foal along with her name.  She is being introduced into Kilimanjaro Safaris with the beautiful name Asha!  Disney said, “Asha’s name means “hope” in Sanskrit, and “life” in Swahili, and it was chosen by Walt Disney World Cast Members, who had a chance to vote on potential names.”  This couldn’t be more fitting of a name for a newborn in the current time that we live in.

Adjusting to Life at Kilimanjaro Safaris

Our hearts are melting over this little love as she trots her long legs around the Savannah for the the first time with her mom.  She looks so happy to be roaming around and we’re excited to follow along with her growing up and interacting with the other wild animals.  Though we can’t see in real life yet with the Disney parks closed, we hope that Disney will continue to post videos of her and the other wildlife inside Disney’s Animal Kingdom Park.

There are many wild animals from different species that are born at Disney’s Animal Kingdom.  Asha is the latest of three animals to be born there this year, the other two being another Hartmann’s Mountain Zebra and an Angolan colobus monkey.  Over the past couple of years Disney has also welcomed a giraffe and calf into the family just to name a few.