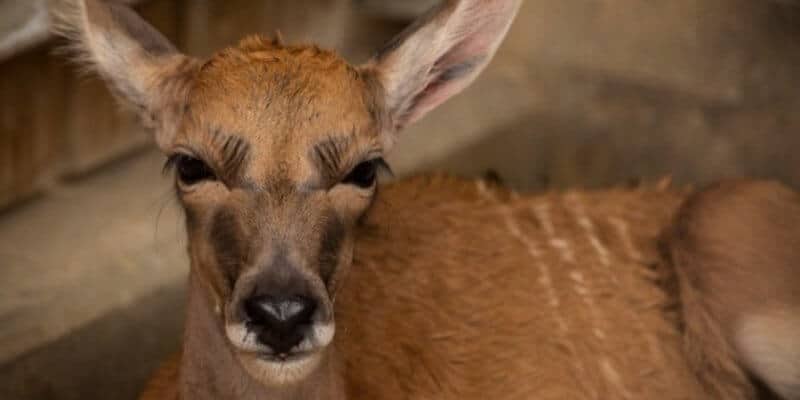 While all of Walt Disney World was bracing for a possible impact from Hurricane Dorian, an expectant eland at Disney’s Animal Kingdom was preparing for something entirely different–the birth of her new calf.

At this time, the baby’s gender isn’t known, but we do know the name they chose for the newest member of Disney’s Animal Kingdom.

They named the baby “Doppler,” in honor of the miracle of his (or her) post-storm arrival.

Cast Members working in every part of the parks and hotels at the Walt Disney World Resort were busy preparing for the possibility of damage from the hurricane that has now moved on up the seaboard from Florida. Cast Members in the Animals, Science and Environment division have different jobs since they are responsible for the care and keeping of the creatures at Animal Kingdom.

These photos were taken only hours after Doppler’s birth, and as you can see in the pictures above, the baby eland was already taking a few first steps–at just a few hours old!

Doppler was born as part of a species survival plan in a partnership between Disney and the Association of Zoos and Aquariums. In the next few days, Doppler’s care team will conduct a neonatal exam to get the baby’s weight, height and gender. Doppler and Mama are bonding well, and they will stay backstage out of the public eye for the next few weeks so that they can continue to bond.

They will join the rest of the eland herd at Disney’s Animal Kingdom out on the African savanna as soon as Doppler’s care team deems it safe to allow the Mama-baby pair to do so.

No matter what baby Doppler does in the coming years, he (or she) will always be remembered as the baby eland born just after the storm passed–sort of a “silver lining” in the clouds, if you will.

Welcome to our world, Doppler!

You can see Doppler and many other amazing animals on Kilimanjaro Safaris.