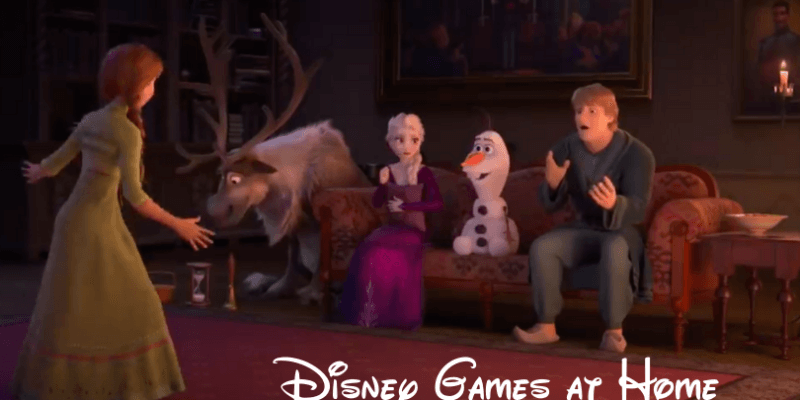 Walt Disney built Disneyland for his kids so he could spend time with them, showing us that it’s important to spend time with your loved ones, whoever they may be.  Though we all love to be at the Disney Parks, we don’t have to be in the parks to be able to combine Disney and spending quality time to the ones we’re closest to. Disney at home can always make how we spend quality time with our family creative.

Yes, there are Disney trivia, board games, etc, but everything that’s Disney was built upon the foundation of imagination.  There’s a ton of Disney games you can play at home with nothing more than people or the materials most of us would have around the house.  Be careful, this might get a little competitive. Just remember to have fun with it!

On little pieces of paper, write down Disney song names and fold them up.  Make sure you have a lot of them and that each player puts an equal number of song names in the basket to make it even!  Place the song names in a basket and mix them up.  Rock, paper, scissors for who’s going first.  If you have more than two players then draw sticks, and the shortest stick will go first.

Set a timer for one minute.  A person other than the person going first will pull the song names out of the basket.  You’ll announce the name and the person who’s up will have to sing at least 2 lines from the song.  They can choose to pass if they can’t think of anything and keep going until the time’s up.  Tally up the totals and the player who was able to sing most songs, wins!

On little pieces of paper, write down Disney movie names and fold them up.  Place them in a basket and mix them up.  Rock, paper, scissors for who’s going first.  If you have more than two players then draw sticks, and the shortest stick will go first.  You’ll take turns in order of shortest to longest sticks.

Pull one Disney movie out of the basket as your category. You have three seconds to use one word to describe something or someone from that movie.  If can’t think of anything, then you’re out.  If you’re playing one-on-one, they you can just keep a tally of who wins which round and see who ends up with the most!

You can totally do a Disney Parks version of this one too!

This one is basically like charades!  You’ll put movie names in a basket like Categories.  You have to act out a scene from that movie and you rpartner has to guess what movie it’s from.  Imagination is highly required for this one!  Do it in teams or with just two people.

If you have more that 2 people in a team, you can make it harder by having just one person as the guesser.  Everyone else will be trying to act out the movie, but you can’t talk! For a Disney Parks version, you’ll put in attractions and people have to guess what attraction you’re at or riding based on how you are acting.

Another one that’s like charades!  Instead of movie names, you’ll put your favorite Disney character names in the basket.  Just like silent scenes, you’ll embody whatever character you go.  Your partner or team will have to try and guess who you’re trying to act like.

This one is fun for the whole family.  You have 15 minutes to do a full outfit and makeup look if needed only using items from your closet.  You’ll come out and present your DisneyBounds and vote on who you think has the best costume!  You can definitely turn this into a themed party with a bunch of people too!

This game has become a hilarious trend on TikTok.  Basically, someone asks a question and the response has to be immediate and wrong.  This one isn’t really a game, but it can be hilarious!  You can do questions from specific Disney movies, Disney Parks, Disney characters, etc.

Questions can be like, “Who’s stuck in the tower?”  The right answer would be Rapunzel, but when someone is trying to answer the question wrong and do it quickly, the answers sometimes come out really funny.

This can be done as a game or just an activity.  If you’ve seen Frozen 2, you’ll completely understand what this game is.  If you haven’t, look for the scene in Frozen 2 where Olaf reenacts the entire storyline from the first Frozen.  For this, you have 5 minutes to do exactly the same thing.

You can pick your own movie to perform.  If you’re trying to turn this into a game, you’ll just put movie names in a hat and draw.  You can vote on who does the best job at reenacting their movie.

Turn your Disney game night into a game week!  This one is totally up in the air for different versions.  You can turn all these games into a week-long event and see who comes out the gold medalist.  Other ways to do a Disney Olympics is to pull iconic scenes from Disney movies or the Disney Parks for inspiration.  Create an event for each of the inspirations and turn it into a long event to see who is the biggest Disney fan!

Other At Home Disney Activities

These games are good if you’re a kid or an adult.  Whatever Disney game or activity you’re participating in, just remember it’s all about the quality time you spend with the people around you.  There is some much Disney magic that you can create yourself with just an idea and some imagination.