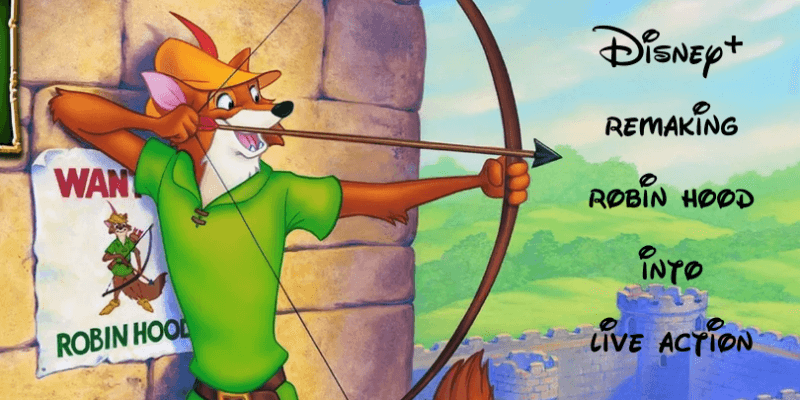 More exciting Disney+ news!  It’s just been announced that the 1973 Disney classic Robin Hood will be remade and streamed on Disney+.

The original animated film was in the first two dozen animated movies that the Walt Disney Studios produced. It took a centuries-old tale and gave it a different spin as animals look over what was human roles.

This musical comedy was a big hit the first time around and we’re very curious to see how it will be received by Disney fans this time around.  The Robin Hood remake production team is one that is very well established.  It will be interesting to see how much of the film will remain in its original storyline and what new added features there will be with the new-age technology.  It will remain a musical film with animals, but this time in “live-action”/CG form (similar to 2019’s The Lion King).

The Director for this film will be Carlos Lopez Estrada.  He’s best known for his directing skills in the film, Blindspotting.  This is an interesting choice in directors, though one that is makes sense.  Since the film is of musical form, his expertise will come in handy.  He has directed quite a few video shorts for music artists.

When Disney+ launched on November 12, 2019, it premiered the live action, Lady and the Tramp.  The scriptwriter for that film will also be scripting this remake of Robin Hood.  Kari Granlund’s work will also be seen in Godmothered on Disney+, but has not starting shooting yet, as she co-wrote the script for that.

Justin Springer is no stranger to the Walt Disney Studios productions.  He’s known for producing Dumbo and Tron Legacy.  He seems to be a fitting choice for having worked on the live action 2019 Dumbo film.  Robin Hood will be of the same nature with live action anthropomorphic animals.

Other Disney Remakes to Stream on Disney+

In recent years, Disney has been remaking many of their animated films and turning them into live actions.  The most recent being Lady and the Tramp.  Some others that you can watch both the original and remake through Disney+ are The Lion King, Dumbo, and Beauty and the Beast (which will soon be coming out with a prequel about Gaston and LeFou.)  Some other remakes that live action remakes that we are waiting for are Mulan and The Little Mermaid.

The Robin Hood remake is still in the early stages of production.  There is no word yet as to when the premiere date will be.  Once it is finished, it will head straight to Disney+ for our streaming pleasure.